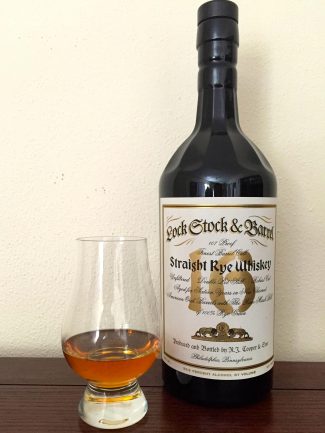 Actually, Lock Stock & Barrel Straight Rye’s Prohibition-style branding is so on-point, it’s almost uncanny. It looks exactly like a prop from a 1930s gangster film, right down to the gold filigreed label and faceted bottle. And this release has one other, less visible thing in common with the stuff that kept the twenties roaring: both were made in Canada.

The first Lock Stock & Barrel release was a 13-year-old Canadian rye sourced from Alberta Distillery in Calgary, the producers of the 100% rye bill that makes up Alberta Premium. It did well, winning a double gold in San Francisco and scoring highly with critics who loved its bold, spicy flavor and slick appearance (the opaque black bottle definitely looks cool, but makes it hard to tell just how much of the stuff you’ve consumed – a real danger considering how tasty it is).

The launch of the second batch of Lock Stock & Barrel earlier this year– now a 16-year-old product– was marred by the unexpected death of Robert Cooper, the founder of Cooper Spirits Company, at just 39 years old. While Robert’s passing leaves what must be a monumental hole at the eponymous Cooper Spirits Company, the show must go on, and Lock Stock & Barrel’s second bottling was released earlier this spring.

Like the first bottling, Lock Stock & Barrel Straight Rye 16-Year-Old is a sourced Canadian whisky, made from 100% pot distilled rye and aged in charred new American oak casks for 16 years in “cold weather.” (All I know about Calgary I learned from Cool Runnings, so that last bit seems right to me.)

Nose: Big, dense waves of root beer, mature oak, vanilla, and spiced stonefruit jam. Green herbs like dill and mint also make a subtle appearance. Although it feels a little piercing and vaporous at first, it mellows out over time. It’s an invitingly complex aroma, with enough diversity between sweet confectionery and herbal medicinal notes that many return trips present something new. A little bit of water amps up the herbal and hazelnut notes.

Palate: Also big and dense. The entry is spicy and wood-inflected with a pleasant, clove-like numbing quality. Then, after a moment, a surprising richness emerges: brown sugar, hazelnut, toasted pecans, and vanilla gelato, with a textured ribbon of spicy, herbaceous rye, pickle brine and all. Pepsi and custard make for a soft-footed finish, leaving a warm, tingly sensation.

The alcohol intensity makes for a relatively thin mouth feel. Water brings out some of the funkier, stemmy qualities of rye (in a nice way!), reminding you this spirit is made from grass.

Whew! This is intense – packed with flavor, and bold ones at that. I loved it. Not for newbies, but if you’re looking for something to enjoy after dinner – with a chocolate torte, with a cigar, or with nothing at all – this is a winner. Not cheap, but a worthwhile splurge if you’re feeling fancy and looking for something North American.