Freddie Noe’s latest experimental Little Book series is here with Chapter Four: Lessons Honored. There’s nothing metaphorical about this title, it’s the younger Noe’s distilling timeline in a glass. It’s also a tribute: all the choices point to Noe’s relationship with the man who taught him.

The brown rice bourbon represents Noe’s first solo distillation, and makes up a majority of the blend. Rice has a long ferment – two or three weeks, as compared to a typical Kentucky whiskey ferment of three days. Of his dad, Fred Noe, Freddie says, “He taught me… to know when to slow down and be patient.” Maybe having your first project be rice bourbon was part of that training. Maybe, given the timeline, this is that bourbon.

Adding high rye whiskey brings in echos of Freddie and Fred’s first commemorative release, 2017’s Booker’s Rye. About 65% rye, it’s higher than any Beam whiskey since that 2017 special edition. The final component, seven-year-old Kentucky straight bourbon whiskey, is a younger, cask strength version of Knob Creek, Fred Noe’s favorite flavor profile. The story goes that the elder Noe was tasting through a series of seven-to-nine-year-old Knob Creek samples and this liquid was his favorite.

Like all the Little Book releases, Chapter Four is uncut, unfiltered, and bears Booker Noe’s nickname for Freddie. 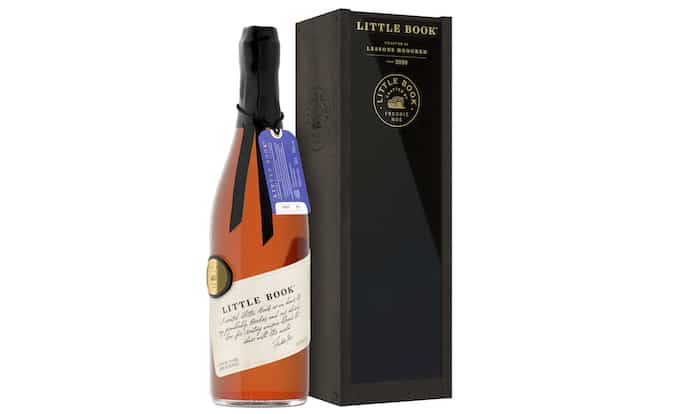 Vital Stats: Clocking in at 122.8 proof, Little Book Chapter 4: Lessons Honored is a blend of three American whiskeys as detailed above. Find it nationwide in limited quantities for around $125 for 750mL.

Appearance: This whiskey is a very clear, medium copper that coats the glass and forms slow, thick tears.

Nose: The nose is savory; a bit saline, a bit restrained. Orange peel and applewood come through, with whiffs of caramel apple, ripe peach and cinnamon: an early harvest season vibe.

Palate: The rich proof finds it aggressively spicy on the palate, with allspice and black pepper. The fruitiness of the nose returns on the mid palate. A lingering finish circles back to savory, distinctly mushroom and parmesan rind.

It's interesting, Little Book Chapter 4: Lessons Honored. I get the whole "uncut, unfiltered" but it works better with a little less heat, a little more nuance. The finish was the most compelling part. Overall this whiskey seemed less than the sum of its parts, disparate pieces knocking around together.