Editor’s Note: This whiskey was provided to us as a review sample by Beam Suntory. This in no way, per our editorial policies, influenced the final outcome of this review.

Okay, I’ll admit when I saw the name of this whiskey I immediately fell in love. Bookers! Books! Puns! Whiskey! Forget raindrops on roses and whiskers on kittens—those are a few of my favorite things.

Little Book is a product release from Freddie Noe, 8th generation Beam distiller, son of current Beam master distiller Fred Noe and grandson of Beam Master Distiller Booker Noe. It’s an annual, limited release series that capitalizes on Freddie’s passion for blending. (Last year we reviewed his first attempt, The Easy.) For this latest bottling Freddie Noe, after traveling to Alberta, Canada as part of his efforts to deepen his whiskey knowledge, developed a taste for the more delicate flavors of aged Canadian whiskies. 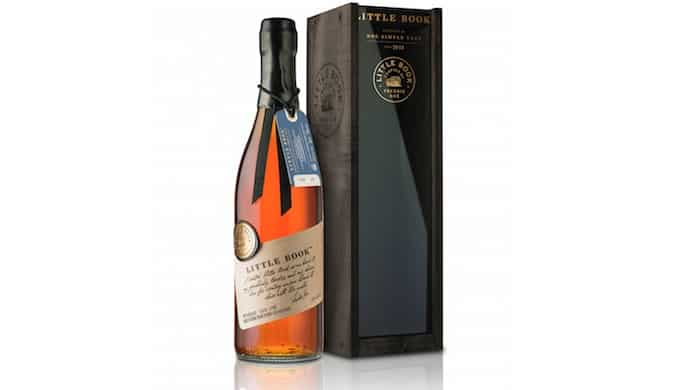 Palate: This…does taste high-proof at all. That’s dangerous–and so damn tasty! I tried this after the WhistlePig Boss Hog, which is about the same alcohol level and that was super-fiery. This, on the other hand, is smooth as hell (and 1/5th the price). It carries over the fruity and sweet qualities I got on the nose and finishes minty and a little licorice, but just barely (which is good because I loathe licorice). Spearmint and wintergreen. There’s no burning, only refreshment.

It’s funny, because I don’t consider myself generally a fan of Canadian whiskey—what I’ve had tastes kind of acrid and unfinished—but this is something I certainly want to savor. It’s got a good rye chew factor. If you can get your hands on a bottle of this limited release, you should! It’s a treat from first sip to long lingering finish.

This is light and a little dangerous and I just love it. It’s the whiskey equivalent of catching someone’s eye, then having them come back and talk to you and they look as good up close and their voice is sexy and they smell good and your bodies fit together well as you lean into each other and you never run out of things to say. That’s this whiskey!