It’s no secret that Jim Beam is the top selling bourbon in the world. Freddie Noe is the son of Fred Noe, Jim Beam’s master distiller, and he’s also the brains behind the Little Book series, a collection of premium blends first released in 2017. If that’s not impressive enough, Freddie Noe also happens to be Jim Beam’s great-great grandson; an eighth generation descendant of the Beam family, which made the brand a staple in liquor cabinets across the United States. In fact, the Little Book series gets its name from Freddie’s childhood nickname, given to him by grandpa Booker.

History and family tradition run deep within the Beam clan. Freddie’s grandfather Booker is well-known for his unfiltered, cask strength Booker’s Bourbon, and worked in the family business for over 50 years. He says that Beams have been living in Bardstown Kentucky for over 200 years – Booker actually lived in the house that his own grandfather Jim Beam built near downtown Bardstown. And of course, Jim Beam himself built the Clermont distillery in Bardstown right after prohibition. Its safe to say whiskey runs in their blood. Figuratively, of course.

Little Book: The Road Home is the third iteration of blends in the series. It features a blend of all four expressions in the Jim Beam Small Batch Collection crafted by Noe’s grandfather Booker Noe: Knob Creek, Booker’s, Baker’s, and Basil Hayden’s.

With Little Book: The Road Home, Freddie pays homage to his grandfather and looks toward the future – the future of the business yes, and also his own growing family. The release is particularly special to him as his grandfather was the master distiller of all four of the spirits in the blend, which his father then marketed to the public. It was important that the character of each expression wasn’t lost or overshadowed. It was so vital that Noe honor his family history it actually took 57 recipes to find what he was looking for: an inviting scent and perfect balance of all four unique bourbons. 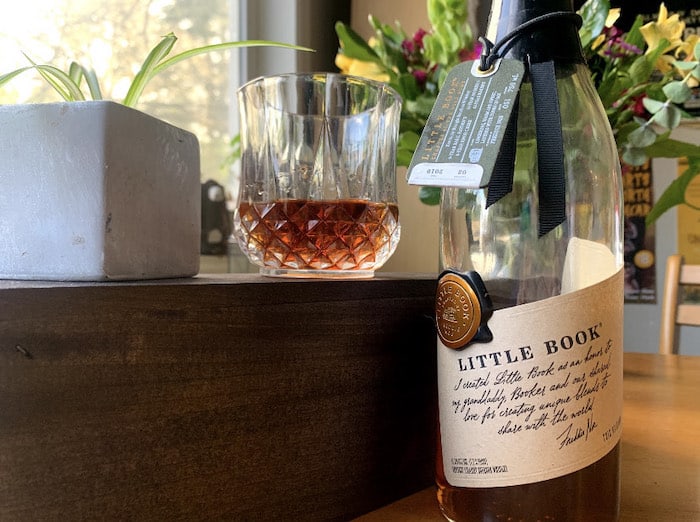 Appearance: Dark, amber and copper notes. Very rich color, and thin but sticky legs. There’s nothing viscous about it – very straightforward in appearance.

Nose: The strength of the whiskey is apparent on the nose. It’s got rich notes of vanilla, oak and some astringency from its high ABV. Sweet notes of caramel stand up to the smokiness of the oak and other scents like allspice and clove find their way into the profile in a subtle way.

Palate: The balance between all four expressions in this blend is apparent from the first sip. Notes of strong rye, caramel, vanilla and charred oak hit in the front, while other nuanced flavors of cut grass, mango, honey and more charred oak continued into the body and throughout the finish. The rye and oak act like a backbone for all the flavors. I can taste how the nuances of each whiskey are captured and amplified by the higher proof.

Little Book: The Road Home is going on the list of my favorite bourbons. It was so easy to sip on; I added an ice cube to make it extra refreshing. I would enjoy this with a New York Strip and buttery asparagus, sitting on a hot porch pretending I'm in Kentucky.