Aside from distilling a great product, there are processes and regulations that distillers can abide by to distinguish themselves from each other. Many will collaborate or experiment with non-traditional flavor pairings. They might go through multiple aging processes in different barrels to heighten or soften flavors. To me, branding yourself as a Bonded spirit is up there with locking down the process to legally call yourself a bourbon.

Bonding follows a very strict process laid out by federal regulations set up by the Bottled-In-Bond Act of 1897. This process was an answer to the flagrant mislabeling and poor marketing that many upstart distillers would latch onto to draw a correlation to the more serious distillers. Having your whiskey bonded meant that you were a cut above and put the utmost care into your product. The Act laid out that Bonded spirits had to follow these steps:

It takes patience to go through a process such as bonding. It also takes the determination to ensure that the whiskey you are going to pour out is going to be worth the price of admission for both the distiller, but especially for the drinker. Laws Whiskey House Straight Rye Whiskey, Bonded, ticks the boxes and shows the fruits of the distiller’s labor.

For this particular release, this whiskey distillery out of Colorado aged it for six years and distilled it from a mash bill of 95% heirloom rye (San Luis Valley rye) and 5% heirloom barley. 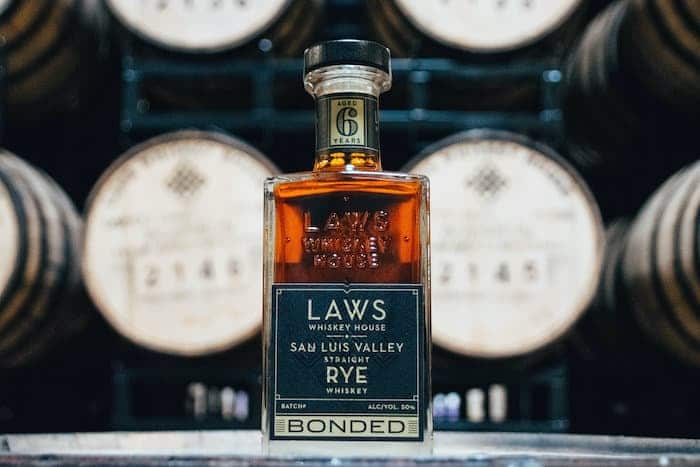 Nose: When taking my first sniff I was intrigued by the soft sweet smell of fresh brown sugar, a hint of clove, and citrus all tied together with a buttery, oaky character that beckoned me in for another pass. Once accustom to the bright scent there were citrus and orange peel notes that joined the party without overpowering the first elements I identified.

Palette: When I taste a rye, I am looking for a lack of pretention, and hopefully a distiller that values balance over complexity. When distillers get wrapped up in being clever, that is when I lose interest. I want craft and substance and that is what shone through in this offering. There is oak and a gentle heat right away that dissipates as the liquor moves across the palette. There is a sweetness of honey and a bit of yeast.

The sweetness evolves into a butterscotch candy mixed with a cinnamon candy. Neither is overpowering, just playful on the tongue. The balance of flavors, heat, and character plays perfectly with no ice or water. Just a well-rounded whiskey that left me wanting another glass.

This is the type of rye that will surprise and please. I would pour this for any of my guest whether we are looking for conversation or just a quiet night under the starts. This is the type of whiskey that I imagine would please most anyone whether they are heavy whiskey drinkers or the occasional imbiber of the brown liquors.