Just as terroir plays a major role most wine production, some distillers like Laws Whiskey House use it to drive the creation of American craft spirits. Laws Whiskey House has been making independent craft whiskey in Denver, Colorado since 2011. They proudly source grains from sustainable local farms and personally distill every drop that they bottle.

Each whiskey is made with the highest level of care using heirloom grains and taking no shortcuts. They use open air fermentation and copper pot column stills to make their award winning whiskey.

Their limited edition Henry Road Straight Malt Whiskey is bottled in bond and uses a heritage barley strain that was literally saved from extinction. The producer notes, “While commercial farmers found it too low yield, Wayne Cody found unstripped flavor too glorious to dismiss. Today, his sons, in a field alongside Henry Road, continue to grow- as well as malt- this barley for Laws Whiskey House.”

Appreciation of American malts has been on the rise in recent years as this niche spirit has become more widely produced and popularized. Production standards are still on the way and will likely mirror those of Scotland, where single malts are always made with 100% malted barley. Laws uses this method for the Bonded Henry Road Straight Malt which is aged at least four years in 53 gallon new charred oak barrels  and sells for around $70 a bottle. 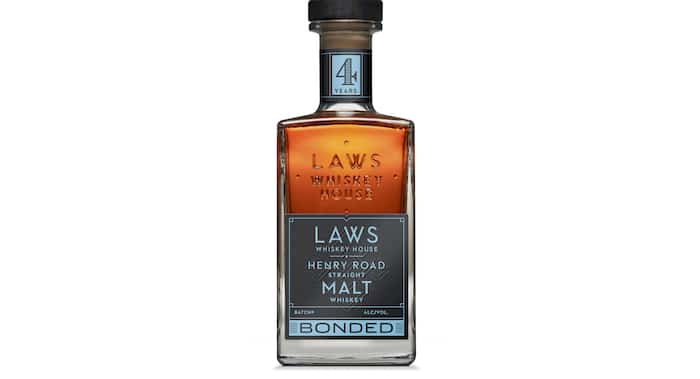 Appearance: This is a yellow gold in color with long thin legs and some noticeable viscosity in my glass.

Nose: The nose is nutty with roasted macadamia and toffee. Newly tanned leather is presented with maple cured bacon and the faintest fume of ethanol.

Palate: There is a pop of pepper in the front and it is just slightly smoky. The mid palate opens with another spike of spice where I can taste cinnamon and star anise accompanied with the earthier notes of mature oak and wet hay. The addition of water opens up the sweetness of butterscotch and caramel. There is a long, clean, and warming finish that lingers in the throat and heats the chest with each of the next several exhales.

Henry Road is incredibly well developed for its age and has flavor profiles that are unique in a malt. It does not attempt to just replicate a Scottish malt and is a bit sweeter than expected. The sweetness is balanced well with pepper and spice, making this an all around pleasant whiskey.

I was happiest with this after adding a couple drops of water and letting it sit for a few minutes. I appreciate the use of heritage grains which contribute to some of the unexpected flavors.