The modern American whiskey trade is one that can’t quite separate itself from its history. Certainly there’s no lack of books written on the subject. Be it the Whiskey Rebellion, prohibition, rebirth and the global rise of bourbon and rye, the world of American whiskey constantly looks backwards, even as it evolves. Just look at the names of different distilleries, and you’ll see the winks and nods to the idea of American antiquity and the industry’s shared history. Early Times, Old Forester, Old Grand-Dad. In the world of whiskey, old = good.

Quincy Street Distillery, whose Laughton Bros. Illinois Straight Bourbon Whiskey is the subject of today’s review, is no exception to that rule-of-thumb. The distillery says they pride themselves in making “historically inspired spirits based on classic and original formulas,” and pay homage to the 19th century history of the Illinois town of Riverside, where they’ve built their distillery. Even the bottle of whiskey itself is a nod to 19th century aesthetic, the label font evoking the small text of old-style medicinal whiskeys.

Their Laughton Bros. Illinois Straight Bourbon Whiskey (the name is a reference to two Michigan fur traders. History!) is made in a copper pot still with a relatively high-corn mash of 83%, with barley malt and rye malt splitting the rest of the bill. The spirit is then aged in large 53 gallon new charred oak barrels for the requisite two years that allows the product to qualify for the “straight bourbon” category. Quincy Street’s main claim to fame, according to them, is that their straight bourbon is the first made in Illinois in “decades.”

Of course, being the first doesn’t mean being the best. And just because you decide to bring back historical formulas doesn’t mean you should… the only way to determine that is to crack open a bottle and taste for ourselves… 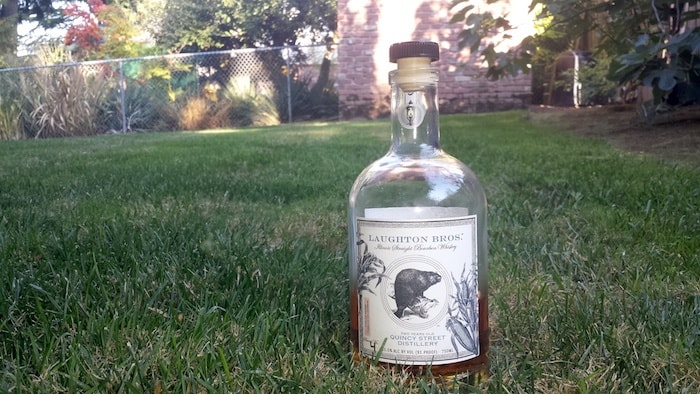 Vital Stats: Quincy Street Distillery’s Laughton Bros. Illinois Straight Bourbon Whiskey is brewed with a mash of 83% corn, with a 17% mix of barley malt and rye malt. Aged for two years in new charred oak, the whiskey comes in at 91 proof. The bottle for this review came from “barrel number 4.” A 750 ml bottle will cost you approximately $55.

Appearance: In the glass the Laughton Bros. Bourbon is a lovely marigold-amber. It has slow, medium-width legs.

Nose: A pleasant nose. Slightly floral – magnolia, perhaps – with hints of clover, cinnamon, and cherry. You can smell a little bit of that rye spiciness in the background.

Palate: The flavor comes in with a bit of heat. Spicy up front, followed by a nice sweetness; jalapeños and honey. That sweetness builds – a bit of a liquorish taste – before slowly and subtly fading away, leaving a mildly sweet finish that falls short of cloying.

I enjoyed this one. Sweet and spicy, without falling too heavily into either direction. I can’t say for certain whether this is what bourbon tasted like back in the 1800’s, but if those spirits tasted anything like this, then I’m grateful for Quincy Street Distillery’s revival. I’m a big fan of bourbons that start strong and finish smooth, and the Laughton Bros. Illinois Straight Bourbon does that particular transition well. If you’re not a fan of sweet whiskeys, this one’s probably not for you… but I have a feeling I’ll be returning to this bottle when the colder weather comes knocking.

Read More Whiskey News
The James Crow Chronicles: Part 9 (Old Crow Brand)
3.5
User Rating 2.5 (2 votes)
Sending
47
Shares
530
Views
Share on FacebookShare on TwitterGet Our Newsletter
Cheers to the Dads! Personalize a bottle of his favorite whiskey to create a modern gift for the modern man. Use code: FATHERSDAY20 for $20 off your next order of $100 or more at ReserveBar