Located just outside of Chicago in Riverside, Illinois, Quincy Street Distillery has been making “historically-inspired, handcrafted artisanal spirits based on classic formulas with unique and distinctive expressions of taste” since 2012. With the release of the Laughton Bros. Illinois Straight Bourbon Whiskey, Quincy Street Distillery has put to bottle the first straight bourbon made in Illinois in more than 40 years. It’s named after the Laughton brothers, David and Barnabas, who were two young fur traders from Michigan. They established a very popular tavern along the oxbow of the Des Plaines River in what today is Riverside, Illinois.

The mash bill is 83% corn, the rest consisting of malted barley and rye in a 19th century style. The whiskey is twice distilled in the Quincy Street copper pot still.  It is aged for two years in 53 gallon, new, charred American oak barrels which satisfies the requirements for a “Straight Bourbon Whiskey.” 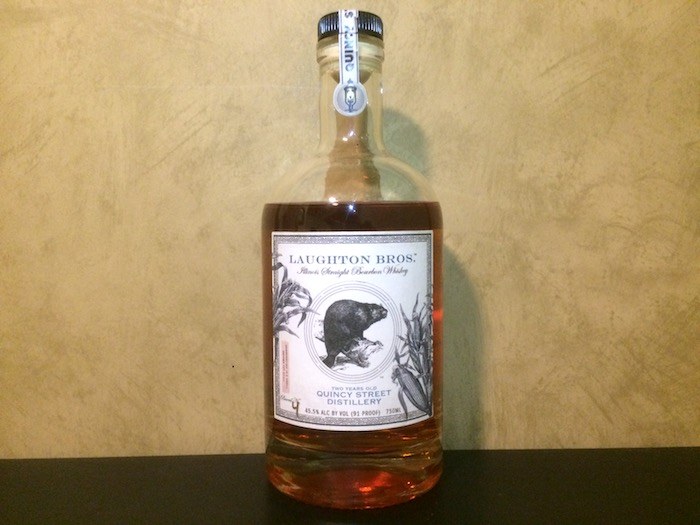 Vital Stats: This whiskey comes in at 91 proof with a mash bill of 83% corn filled out with malted barley and rye. It’s aged two years in new charred oak barrels and sells for about $56 per 750ml bottle when available.

Appearance: Clear and chestnut in color with slower legs of medium thickness.

Nose: Instantly honey and malted grain jump out, followed by apple, baking spice, caraway, bold grain, and sweet corn. There is caramel and soft tobacco, but also a very subtle herbaceous undertone. The longer the whiskey is in the glass the more defined the rye and barley feel, but the softer qualities don’t fall completely away.

Palate: The palate definitely matches the nose for me. I get apple, herbs, rye, malted barley all immediately out of the glass, followed by vanilla, caramel and baking spice. The whiskey feels clean and well made, and has a warming finish in the chest. It doesn’t drink particularly hot despite having a somewhat aggressive alcohol touch on the throat.

Quincy Street Distillery does indeed seem like it is trying to create a unique and distinctive spirit here. The use of both rye and barley malts is applied well here. This is a bigger style bourbon with many layers but does lack some subtlety and elegance. I’d gladly sip this whiskey neat or alongside a beer. I also wouldn’t hesitate to make cocktails with it. It should stand up well in any robustly flavored cocktail format and will add flavor even in small amounts.