I remember when Heaven Hill released Larceny in 2012. I was an instant fan when I tasted it at a spirits convention. Eight years later, Heaven Hill has released a barrel proof version of Larceny. While Larceny is 92 proof, the Larceny Barrel Proof B520 reigns in at 122.2 proof. Three batches are released annually, and this is the second batch of the year. The first, Larceny Barrel Proof A120, was released in January and you can read our review of it here.

If you pick up any bottle of Larceny, you’ll notice the name John E. Fitzgerald and a key on the label. So what is the significance of this? Well, John E. Fitzgerald was a bonded treasury agent, and had the keys to all the rickhouses. He loved a good bourbon, and would often siphon off a taste or two from the bourbon barrels. Whether or not he started his own distillery and sold it off to Pappy Van Winkle is a story for another day.

Larceny is a go-to for my Old Fashioned, and the Larceny Barrel Proof kicks it up a notch. However, I thought I would change it up a bit by turning my usual nightcap into dessert. With summer in full swing, and time on my hands, I turned an Old Fashioned into jello.

In a bowl, add 1 cup of bourbon and sprinkle the gelatin over it. At the same time, boil water with bitters, sugar, and the remaining ½ cup of bourbon. Let the sugar dissolve. Slowly pour boiling liquid over the bowl of bourbon and stir until the gelatin is completely dissolved. Mix in the orange zest.Put a cherry or two in the bottom of the rocks glass and pour the gelatin mix over (test to see how hot it is before pouring into rocks glasses). Chill in the fridge overnight.

For those wondering about the “B520” batch number, here’s what to know about Heaven Hill labeling practices for Larceny Barrel Proof. Each release “will have varying proofs and consist of barrels aged six to eight years. A naming convention for the release is shown on each bottle. The alpha character in the naming convention designates which batch of the year that bottle came from, the numeral that follows represents the month of the release, and finally the last two digits indicate the corresponding year of the release. 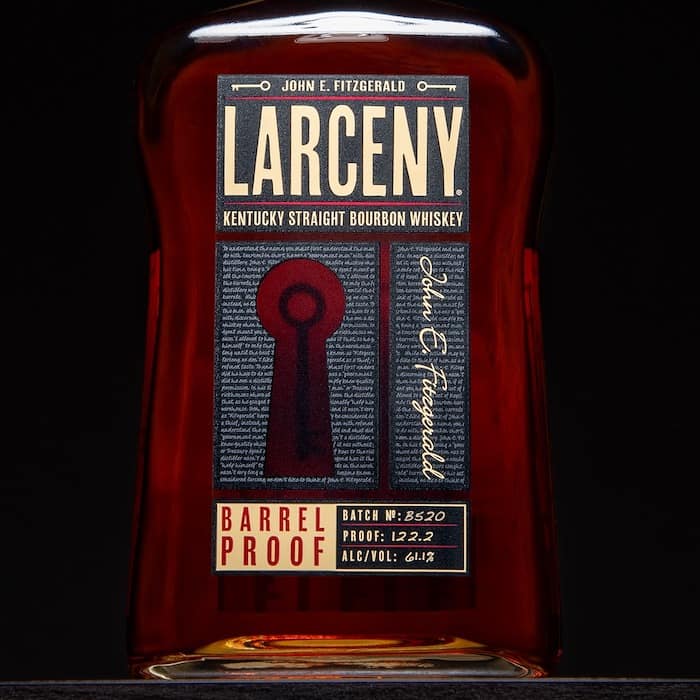 Nose: Vibrant cherry and orange segment pop out first. Underlying the cherry and orange is stone fruit, a mixture of ripe peaches and nectarines. I suddenly have a craving for Haribo peach gummies. There is a small hint of toffee, but mostly the sweetness comes from fruit notes rather than sugar or caramel notes. The end of the nose reveals a wood spice like sandalwood. The whiskey also has a touch of mint and herbaceousness.

Palate: I can’t believe it is barrel proof. You don’t get the heat from the alcohol until you’ve finished your sip and it’s sitting in your belly. It’s very sweet on the palate, but rather than a heavy mouthfeel, it is oily and dissipates quickly. The oak provides a nice dryness, and I get a sense of applewood smoked jerky. It has a bit of leather and sour mash to it. Fresh mint sprig lingers on the breath after you finish it, but it’s not like menthol. Cherry and orange peel finally show up on the tongue in the aftertaste.

Larceny is a must have for your home bar, and adding the Larceny Barrel Proof will give an extra kick to your cocktails or just to sip. For a wheated bourbon, the barrel proof is more complex than just the regular Larceny. You do get spice from the ABV, but it's very flavorful with the fruit and mint. If you're a fan of Old Fitzgerald or Bernheim, and haven't tried Larceny yet, do yourself a favor and get a bottle.

Having both Larceny and Larceny Barrel Proof will make sure that whichever mood you're in, you'll be taken care of. With it's profile, don't be afraid to sip it neat or mix in various cocktails. The mint notes from the Barrel Proof would make an excellent Mint Julep.