Editor’s Note: This whiskey was provided to us as a review sample by Kooper Family Whiskey. This in no way, per our editorial policies, influenced the final outcome of this review. It should also be noted that by clicking the buy link towards the bottom of this review our site receives a small referral payment which helps to support, but not influence, our editorial and other costs.

Last year, we reviewed two of Kooper Family Whiskey’s offerings: the Kooper Family Rye and Sweetehart of the Rodeo Bourbon, and related the story about how the company was founded. Back in 2012, Troy and Michelle Kooper wanted to go into business together to create something that Troy could do from home, in order to spend more time with his wife and new baby: Why not whiskey?

I’d think that would be more time-consuming than a job in advertising, which was what Troy did before the couple picked up whiskey making, but who knows? Maybe it’s a labor of love when you do something you love with the people you love. That gives me hope.

Anyway. Although they first began learning how to make whiskey themselves, they soon turned to blending and aging whiskey instead. The Kooper approach differs largely in the mash bills they bring together as well as their aging process: They use the Texas climate to their advantage by aging their whiskey in Texas’ intense heat and wild temperature fluctuations (wonder how this past winter will affect their products?!). But they’re likely doing something right; in our review of their Prodigal Son Bourbon a few months later, we shared how their company has grown 30 percent annually. They’re one of the only whiskey blending houses in Texas.

Their Single Barrel Bourbon was, according to Kooper’s, distilled in Indiana and aged for 4-5 years in #3 char American White Oak. The mash bill is 75 percent corn, 21 percent rye, and 4 percent malt. It’s 92 proof and about $45. 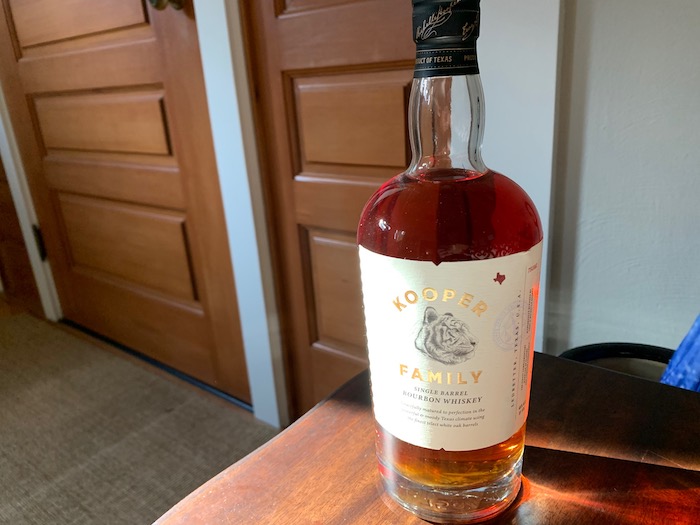 Vital stats: Distilled from an unknown source in Indiana (when I hear this I think MGP, but maybe I could be wrong, but it’s not like MGP is a bad thing regardless) and aged in Texas; mash bill of 75 percent corn, 21 percent rye, and 4 percent malt; about $45; 92 proof (46 percent alcohol).

Appearance: Red undertones. No gold here. It carries some richness. Roasted chestnuts. The leather of a fine armchair that makes you sit up straight (no slouching allowed!).

Nose: This is really elegant on the nose. There’s a pleasant depth to it. To me, it veers fruity: Cherry vanilla ice cream. Pomegranates. But also sweet, like melted caramel and browned butter. Welcoming.

Palate: Lovely, sleek mouthful. A bit of ginger on the finish. Some cinnamon even later. This whiskey has a fine drawl to it: Not syrupy, more soft. Welcoming on the palate as well as the nose. This bourbon is like the whiskey equivalent of “y’all come back now, you hear?” Very Texan, I guess. And very drinkable. Either on its own or in a drink, but at 92 proof it’s a high-proof cocktail you’d make. But who cares, we’re all still at home, pretty much, where are you gonna go? This whiskey is a good ole’ value too – at around $45 it tastes like something twice the price, honestly. I’ve had whiskies twice the price which are not nearly as good.

There is a solid elegance to this bourbon. Like someone who looks good in a suit, so good that you can’t imagine them in jeans but then they pull that off too. There’s grace to this whiskey. It stands tall. It does not slouch. I really really like this. Well done, Kooper Family.