Editor’s Note: This whiskey was provided to us as a review sample by Knob Creek. This in no way, per our editorial policies, influenced the final outcome of this review.

Ever since the U.S. launch of its straight rye whiskey in 2012, Knob Creek has become perhaps as known for rye as it has bourbon. Knob Creek Straight Rye Whiskey has since garnered notable awards and accolades (e.g., 2016 International Wine and Spirits Competition “Best Rye Worldwide Whiskey”), with a cask strength edition released earlier in 2018. The latter nabbed an award from the San Francisco World Spirits Competition (2018 Best in Class Medal for Rye) – receiving the honor prior to its official release for public sale.

As recently reported, the latest special edition rye from this American whiskey brand is the newly released, limited edition Knob Creek Twice Barreled Rye, which aims to transform its straight rye whiskey through a round of barrel finishing in new, charred American oak barrels. The reason for this, it is said, was to offer flavor wise what’s described as the classic spicy signature of rye amplified “by robust oak and warm spice notes with a touch of sweetness from the secondary barreling process.”

As it turns out, this makes for a non-traditional rye that may pique the palate of rye- and bourbon-lovers alike. 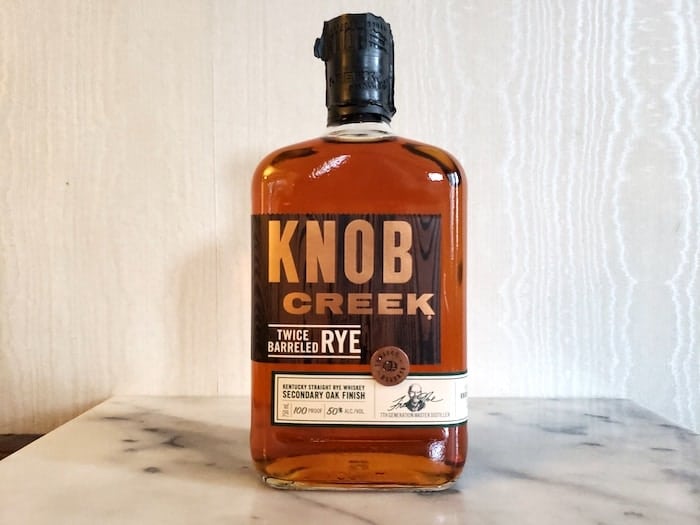 Palate: Full-bodied and toasty, albeit neither overly spicy nor complex, from start to finish. The second barreling does its job of imparting a sweetness – with notes of tamarind and dark caramel. Then comes the warmth of cardamom, cinnamon, fennel seed, and grilled bread, with those notes continuing to linger on the finish. The aftertaste and mouth-feel offers a slight nod to rye, but overall the weight and richness rings more of a rye-bourbon marriage – and the “edge” and harsher notes typical of a rye are softened.

Simply put, this is an enjoyable sipper. The brand recommends imbibing over ice or in an old-fashioned, but I think it also holds its own neat -- and plan to try it in a Manhattan. It’s a mellower, yet richer and smoother cousin to Knob Creek’s Straight Rye Whiskey, and only about $10 more. For limited release bottle under $50 with a lot to offer, it'd be a nice addition to the collection of anyone who enjoys both rye and bourbon.