On my 21st birthday, a long-time whiskey drinking friend suggested I try a shot of Knob Creek Single Barrel Reserve neat. The bold, spicy flavor was so strong I almost did a spit take. It was a sobering experience (figuratively, at least), and one that would carry me through my whiskey drinking career.

Jim Beam first introduced Knob Creek in 1992. The brand is known for its “big bold” Prohibition-style flavor. According to their website, the end of Prohibition caused a rush of younger whiskeys to be pushed to market giving Americans a taste for so-called softer whiskeys. But Booker Noe (famous for loving bourbon’s big, bold flavor) wanted to bring back that earlier style, and so the Knob Creek label was introduced under his tenure as Beam’s master distiller.

This summer, Knob Creek is releasing its 25th Anniversary Limited Edition Bourbon, an unfiltered cask-strength single barrel whiskey. This release was originally produced back in 2004, and is slated to be a 12-13 year old offering. For comparison, that was the same year that George W. Bush was re-elected president, Martha Stewart went to jail, Janet Jackson had her infamous wardrobe malfunction, and Napoleon Dynamite stormed the box office.

But don’t be fooled. While the age of a whiskey is important, so is the selection of barrels for the vatting. There’s no foolproof formula, and distillers need to rely on their senses rather than a set of rigid rules. Lucky for us, the folks at Jim Beam have impeccable taste. 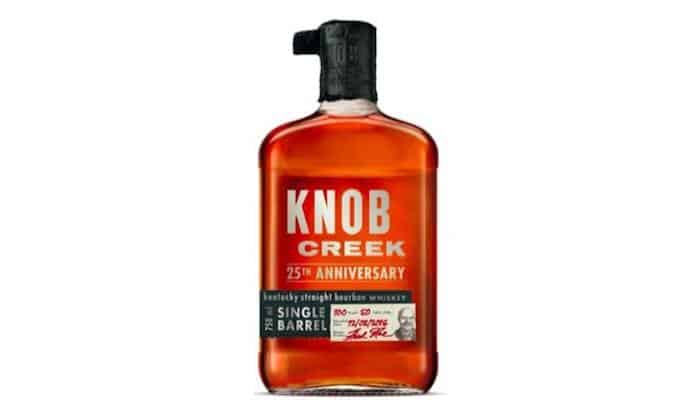 Appearance: Mildly cloudy (from being unfiltered) with a hue like deep amber honey.

Aroma: Soft on the nose and yet surprisingly deep, suggesting a spicy kick that never arrives. Despite its high proof, this whiskey never feels boozy.

Palate: The flavor starts out with a melange of dark chocolate and vanilla, before transitioning to smoke with notes of tobacco, and a bit of cinnamon peeking through in the finish. This is a whiskey that demands to be savored. A few drops of water turns this into a sumptuous feast of flavor, with apple pie and a strong vanilla component. Whatever burn you may find here is subtle, like glazed ham slow cooked over coals.

While the price alone will keep many intermediate whiskey drinkers from ever getting to sample this whiskey, it's a shame, because if you have the money, the Knob Creek 25th Anniversary Limited Edition Bourbon is worth every penny. This is a bottle to bring out on special occasions and to impress discerning whiskey drinking fans. Its bold and complex flavor is a love letter to the folks who've supported the Knob Creek brand for the past 25 years.