Brown-Forman is back with the much-ballyhooed King of Kentucky. Starting life as an unremarkable straight bourbon, later converting to a blended whiskey in the dubious times of the post-war era, the King of Kentucky brand was resurrected in 2018 as a premium single-barrel bourbon.

Due to its limited release (about 2,100 bottles for 2019), the whiskey has mostly beeb sold in Kentucky, though a few bottles (38) made the trip to Ohio. Hopeful collectors there needed to enter a raffle for the privilege of picking one up.

This whiskey is special – just 27 select barrels that were distilled in 2004, and each bottle is a single-barrel expression. These barrels undergo heat cycling, where steam heat is pumped into the aging warehouse, opening up the wood and giving the whiskey access to more flavor compounds.

“King is different from the other bourbons in our portfolio due to the combination of heat cycling and long maturation,” said Brown-Forman Master Distiller Chris Morris. “For example, the oldest Old  Forester Birthday Bourbons were just over 12 years of age. King has averaged nearly three years longer in a heat cycled environment. That is equivalent to another six years of maturation if the whiskey was aged in a non-heat cycled warehouse.”

Let’s see what all this care and attention put in the glass! 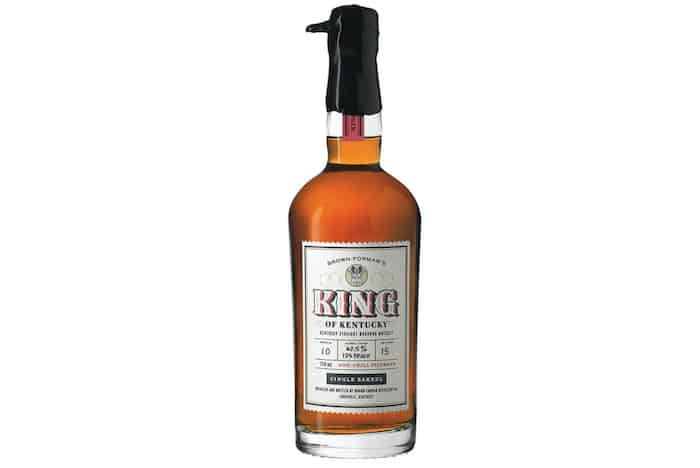 King of Kentucky 2019 (image via Brown-Forman)

Appearance: The bourbon is a very clear, rich chestnut that quickly forms fat tears in the glass.

Nose: The nose gives the sensation that I’ve stepped into Bath & Body Works. Clean perfumes of vanilla extract and pineapple predominate, followed by the tiniest whiff of turpentine.

Palate: This whiskey is hot while still smooth. There is a saline quality with sweet flavors leaping forward: cherry candy and yellow cake. The finish stretches on and on, tasting of roasted nuts.

This whiskey is a delight; clearly well-selected. If you have the opportunity to compare with other barrels I would do it in a heartbeat.