We’ve got a comeback kid here, everyone. Kilbeggan is legally the oldest pot distillery in Ireland, thanks largely to each owner having paid the 5 pound annual fee to keep the license alive over the years. It has not been in continuous operation, but it did get going back in 1757 and has now released their first 100% produced-on-site product in many years. Rebuilt by the town it resides in the whiskey is not only interesting with its own unique history, it tastes great too.

After tough times during the United States prohibition and a handful of other problems, the distillery went into disrepair. A buyer from Germany came in and sold the remaining stocks of whiskey during the 1960’s and there was little hope left. In 1982, that all changed when the local preservation association used locally raised funds to rebuild the site as a museum.

Here arrives the Cooley Distillery, who purchased assets to allow them to make whiskey under the Kilbeggan name. It wasn’t until 2007 that distilling commenced once again. It was three years after that when the site had mashers and fermenters installed in order to produce spirits from start to finish. Beam (later Beam Suntory) acquired Cooley a few years ago and here we are.

The important thing to know is that Kilbeggan is making a few really great products these days. Almost more notably, they are using the oldest (180+ year old) copper pot still in operation. As I write this I’m sipping on whiskey from the oldest operating pot still, which I think is just awesome! Here we have their Single Pot Still expression, which is influenced from the late 1800’s in its mash bill. They are using about 2.5% oats, which doesn’t sound like a lot but it has a nice impact.

Historically, oats were used both for the preferred flavor and creamy texture they brought to the spirit but also for filtration. The hulls and husks that protect the starch containing oat were used in the bottom of the wort pits to naturally filter the wort. With more modern techniques it’s more likely that it is just for flavor these days, which something that several distilleries are taking advantage of.

In addition to oats, the mash bill has both malted and unmalted barley. The spirit is distilled twice in copper pot stills to 86 proof and aged in ex-bourbon casks. This expression and their Small Batch Rye are both produced completely on site from a small team in what appears to be a beautifully restored distillery. 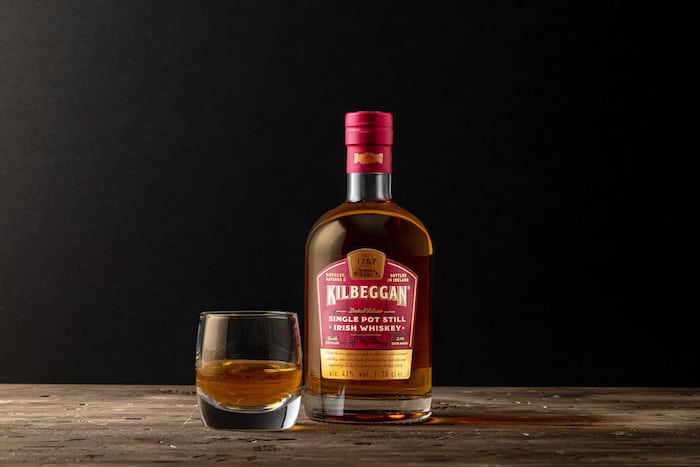 Nose: Nice and dry with a lot of cereal. Grain and malt right away, with a creamy dairy aspect. Orange blossom, apricot and green apple. Touch of spice and almond.

Palate: Grain again, with plenty of lemon and yogurt leading to a lot of salivation. Toasted nuts and white bread with a honey sweetness. Pleasantly light in the way it first arrives, but much more mouth coating and collected than your average Irish whiskey. A bit of green tea and a tannic dryness, which leads to a calm and collected finish.

I was happy with this whiskey on the first sip. I found it pleasantly balanced with some really nice key notes that keep it entertaining. However, the story behind the brand is a refreshing one to me. There are many new or revived brands popping up these days with a family heritage claim or something along those lines.

Learning about Kilbeggan makes you want to believe in the time and place of what brought this brand back into existence. What really sweetens the deal? This whiskey is only $45, that’s incredibly fair if you ask me. Overlooking the fact that it’s owned by one of the biggest spirits companies in existence, we can sip happily or even make a cocktail with this lovely whiskey.