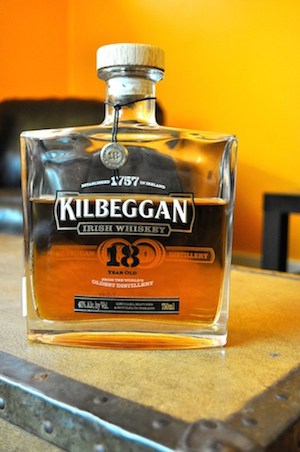 There’s a long, long history of whiskey distilling in Ireland, by most accounts predating the history of distillation in Scotland. While the origins of distilling in the British Isles are somewhat murky, most report that Irish monks are responsible for introducing the secrets of distilling to that auspicious part of the world more than 1,000 years ago, and it was the Irish who later introduced the Scots to the wonders of whiskey. And for a long time—perhaps most of whiskey’s history—Irish whiskey was known to be the finest whiskey in the world.

But the 20th century brought troubles. The combination of American Prohibition, the Irish War of Independence, two world wars, and the Northern Ireland conflict was too much for the Irish distilling industry to bear. By the 1970s, just two distilleries were still operating in Ireland, and production had dropped from 12 million cases in 1900 to just 500,000 cases in the 1970s.

Kilbeggan Distillery endured until 1957, when the facility was closed. For the first 25 years of its closure, the building was totally unmaintained and unoccupied; in 1982, the local community raised money to re-open the distillery as a museum, although no whiskey was made there until the mid 2000s, when its new owners, Cooley Distillery (held by Beam-Suntory), finally returned the property to production.

Today’s Kilbeggan Distillery recommenced operations in 2007, at the beginning of the Irish whiskey renaissance that continues today. The first Kilbeggan-distilled whiskey became available in 2014, although this release, Kilbeggan 18-Year-Old, is too old to have been distilled at the new facility, and was likely produced at the Cooley Distillery, about 85 miles to the northeast in County Louth. However, the box says it was “matured in the ancient granite warehouses in the Old Kilbeggan Distillery.”

Vital Stats: 18 years old, 80 proof, made from “selected casks of the oldest grain and malt Irish whiskey,” currently selling for around $200 on the secondary market.

Appearance: Packaged in a handsome presentation case, including a slick inner frame with a magnetically operated closure, this sure looks good on the bar top. Inside, the spirit is a warm, rosy apricot.

Palate: The overarching impression I get from this whiskey is easy sweetness, punctuated in a few places by unusual notes that keep the whole thing from straying too far towards saccharine. In the front, there’s a botanical quality—a bit of tomato leaf, wet greenhouse, and herbal salve. In the finish, I get a wisp of sandalwood incense, dry and perfumed. Between those two flavors, there’s a warm, buttery expanse of baked goods and roasty grain, with a slightly tart edge that reminds me of inexpensive apple juice.

Overall, this is very friendly whiskey, easy to like and effortless to sip. Relatively light and somewhat thin on the palate, I’d never guess it was 18 years old, and it’s a bit milder than the kinds of things I generally gravitate towards—but, if you’re looking for something that’s special without being the least bit challenging, this might hit the spot.