As mentioned in our previous coverage of Joseph A. Magnus (here’s a link), the recently revived brand hailing from Washington, D.C., Joseph A. Magnus, a pre-Prohibition distiller, started his namesake brand and distillery in 1892. While this brand fell victim to Prohibition and the burden of time, a few bottles of whiskey made by Magnus survived over 100 years, being passed down from generation to generation.

As mentioned in this Washington City Paper article, Magnus’ great-grandson, Jimmy Turner, found one bottle of this historic bourbon when cleaning out his mother’s house in 2007. Intrigued by the old bottle of bourbon, Turner set off to learn more about his great-grandfather’s work, and in the process, acquired empty Magnus liquor bottles as well as one more sealed bottle of whiskey from relatives.

After a few years of research and consultation with bourbon veterans, Turner and a team of liquor industry all-stars (you can read about the impressive founding team in the above-referenced Washington City Paper article) re-established Joseph A. Magnus & Co. in 2015. For its first whiskey, called Joseph Magnus Bourbon, the brand sourced bourbon from MGP in Indiana and finished the bourbon in used Oloroso sherry, Ximenez sherry, and Cognac barrels.

Following the first bourbon, Joseph Magnus released a bourbon blend intended to pair with a cigar, appropriated dubbed Joseph Magnus Cigar Blend Bourbon. For the first batch of Cigar Blend, Nancy Fraley, Master Blender at Joseph A. Magnus blended the triple cask finished Joseph A. Magnus with 11-year-old bourbon and 18-year-old bourbon and then finished it in ex-Armagnac barrels. 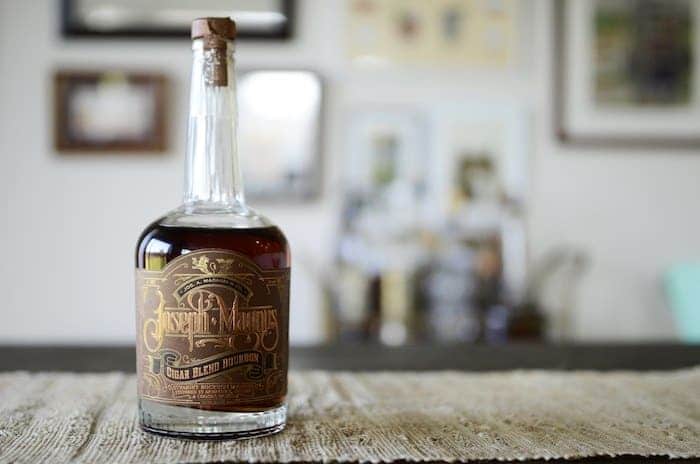 Appearance: Due to the barrel finishing in Armagnac, Cognac, and sherry casks, Joseph Magnus Cigar Blend appears a dark amber in the glass.

Nose: Spice notes of nutmeg and allspice drive the nose of Joseph Magnus Cigar Blend bourbon, while dark, sweeter notes of tobacco, leather, and plum balance the aroma. After resting in a Glencairn glass, the spice notes lighten and mingle with the sweeter notes, and a seasoned oak note becomes detectable.

Palate: For the front of the palate, classic bourbon notes of vanilla, caramel and toffee dominate. Due to the finishing casks, things get interesting in the mid-palate. Specifically, the finishing casks add dark fruit notes of plum and prune, while a light spiced note of seasoned oak finishes out the mid-palate and carries over to the finish. The seasoned oak spice note mingles with and over powers the dark fruit notes on the finish and results in a long, dry, light spice and dark fruit finish.

Simply put, Joseph Magnus Cigar Blend delivers a great flavor profile. The flavors derived from the different barrel finishes elicit strong dark fruit and tobacco notes that usually only pop up as lighter notes in a typical bourbon. In addition, the blend packs some very nice seasoned oak notes that I would attribute to a well-aged bourbon.

The only hang-up for some may be the hefty price tag and the extremely limited availability. However, if you’re already shopping in the premium bourbon category (and find yourself in Washington D.C.), the $200 price tag won’t seem that far out of the norm, and Cigar Blend compares favorably with most other bourbons in this category.