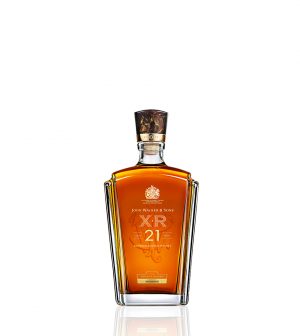 ‘Tis strange to ponder the fact that blended whisky used to be illegal in Scotland. Believe it or not, prior to 1860, single malts mixed together with grain alcohol were considered to be quite unorthodox, and even taboo.

Enter: Walker’s Old Highland in 1865. That’s right, in less than five years, the Walker family leapt into the history books with its company’s first official blend at a time when the marketplace was still overwhelmingly dominated by single malts.

The world of whisky making was very different one hundred and fifty years ago. To offer a sense of perspective, at that time, grain whisky had only been around for thirty-four years. Thanks to the relatively new and ingenious invention of Aeneas Coffey, the inventor of the eponymous “Coffey” or continuous still, new products beyond single malt were now possible to be made. Yes, we are talking about a time in the distant past when grain alcohol was considered innovative, especially if it was blended with single malt for flavor and consistency.

It didn’t take long for distillers to realize that the addition of grain whisky to their single malt was more than a little convenient. Lower manufacturing costs reduced the price of a bottle of blended whisky, thus attracting far more customers to drink blends. Everybody was happy: distillers made more money while offering a less expensive option than single malt.

Fast-forward one and a half centuries. Today, blends constitute a massive segment of the overall whisky market. State-of-the-art distilling technology and modern science both play a hand in making whiskies fairly consistent, and dare I say “predictable,” when compared with the ancient of days.

As you may know, Johnnie Walker sold more whisky in 2015 than any other company on earth. Most of the “water of life” is blended scotch that mixes grain whisky and a special combination of single malts.

John Walker & Sons XR 21 is a very special offering, indeed. All whiskies in this blend are 21 years or older. Forget the diminutive “Johnnie.” With this sleek (and expensive) offering, it’s “John” to you and me.

XR is is the oldest Walker available worldwide. It comes in a fancy decanter-style bottle with a gold colored (plastic) stopper. On top of that, the whole works is packaged in a metallic gold box, which features a striking cut-out that reminds me of a hybridized Maltese cross and a Celtic cross.

I really do appreciate the heavy glass base of the bottle. The thing seems heavy enough to bludgeon an orc or even a balrog (if you happen to be a Lord of the Rings fan).

Within the rather substantial bottle, you will find a whisky with a golden appearance that takes on a deep vermilion hue depending on the lighting (thanks, in part, to artificial coloring). Frankly, it’s worth mentioning that the whisky in my glass appears quite a bit more gold when compared with advertisements online that remind me of burnished copper.

The scent gives off a mysterious waft of fruits. Would it be a “cop out” to admit that these defy precise association due to the blend at work here? I can’t pick out a single kind of fruit, but no matter. Vanilla and lotus flower mingle with a pleasantly noncommittal type of fruitiness, along with some woodiness from 21 years or more in quite a few different casks.

For me, the cask presence reminds me of balsa wood and the planes I would often build as a boy from “lighter than air” tropical woods…all told, a rather nice nostalgic memory.

I can also detect coconut pulp on the nose rather than the drier type of shredded baker’s coconut. All of these scents comingle in a rather exotic way.

At forty percent alcohol, the mouth feel is luscious and smooth with absolutely no need for water. Stone fruits like peaches and nectarines emerge to swirl around a ring of pineapple. Coconut makes an entrance, but this time, it reminds me of baker’s shredded coconut. Waffle cone asserts itself. And, finally, some tartness from wood tannins helps to balance all of the sweetness.

Be this as it may, don’t expect the vanilla and caramel flavor that accompanies a high percentage of first fill casks. In the XR, I catch more second and third fill flavors on the palate. These are quite enjoyable, though not what I would characterize as “overly ambitious” in terms of complexity.

In the finish, a bit of caramel comes to the fore. Surprisingly, it rises to the roof of the mouth: a slight bitter note rears its serpentine head, only to sink back into a wave of vanilla extract. Yes, first-fill casks become noticeable, if at the death. Very nice and reassuring. I would characterize the XR’s finish as “medium” in length.

John Walker & Sons XR 21 is the perfect gift for a whisky drinker who appreciates the finer things in life, without the need to sail out into the deep turbulent waters of single malt Scotch in extremis. That is to say, die-hard fans who require complex and rare bottlings will not swoon upon tasting this whisky, no matter how much money was spent to acquire it, or how beautiful the packaging might be.

I certainly appreciate the chance to taste this rare and expensive bottle. Speaking of which, while we’re on the subject: If you are already a fan of Johnnie Walker Platinum Label 18 or the infamous Johnnie Walker Blue, then the XR 21 should be right up the slip of your marina, so to speak.

Yes, it is the perfect bottle to uncork for company on the company yacht, when there are more important things to discuss than “What’s in my whisky tumbler?”