Editor’s Note: This whiskey was provided to us as a review sample by JK Williams Distilling. This in no way, per our editorial policies, influenced the final outcome of this review.

Recently revamped in the oldest continually operated distillery in Peoria, Illinois, JK Williams Distilling is bringing their version of Prohibition era whiskey to modern day consumers. Prior to 1919 Peoria was considered one of the nation’s largest alcohol producers. At one point the town proclaimed itself to be “The Whiskey Capital of the World” and paid more alcohol tax than any other city.

The distillery’s new owners Andy Faris and Stacy Shunk aim to revitalize Peoria’s history with craft spirits. In a statement put out when this historic brand was brought back to life Faris said, “We’re excited to revive not only the brand but the culture of whiskey production in the area”.

This distillery traces its whiskey making history back to their namesake JK William’s original recipes. JK Williams was known for being a big time bootlegger in the area during Prohibition. Contributing to his legendary status, he is rumored to have been eventually run out of town by gangster Al Capone.

Some of his descendants originally founded J.K. Williams Distilling back in 2010. Alas, the familial reboot of bootlegger whiskey was a short lived dream.  They closed their doors after eight years in business. Their stills and inventory were acquired by Faris and Shunk, who reopened in a new location.

To date, JK Williams Distilling has bottled both a bourbon and a rye for their initial launch and plans to expand with other spirits in the near future. Gold Zephyr bourbon, the subject of today’s tasting, debuted by winning a gold medal at last year’s USA Spirits Ratings. Gold Zephyr is bottled at 90 proof with a mash bill that is unreleased at this time. It is available for $60 per 750 ml bottle at select retailers around Illinois. Gold Zephyr will eventually be sold in a new JK Williams retail space in downtown Peoria. 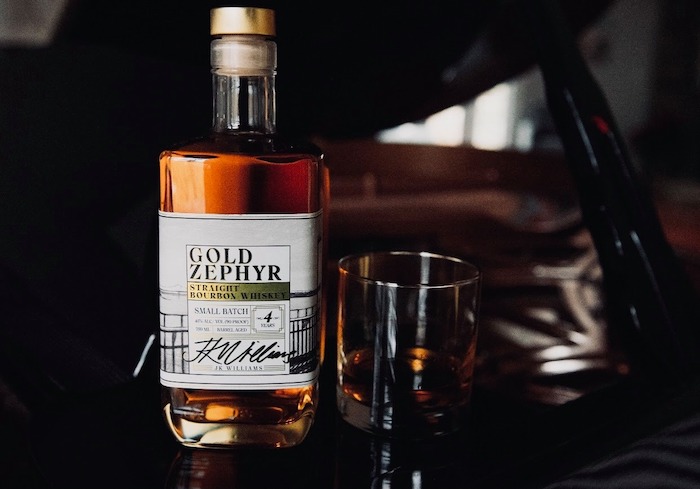 Appearance: This has a light copper tone and is noticeably cloudy.

Nose: The nose is fruity with cranberry and plum, honey and mint mingle with a subtle bittersweet cocoa nib. This is cool on the nose for a bourbon with the warmer notes of caramel and vanilla emerging only at the finish.

Palate: There is the fruitiness of dried dark cherries on the front palate with a kick of spicy gingersnap. Sweetness is all around subdued with cinnamon, pepper and oak taking center stage in the mid palate. The finish is long, hot and bitter.

I enjoyed reading the history of this distillery and the revival of Peoria spirit making far more than I liked tasting their whiskey. The bitterness of the finish was actually an astringent flavor that hung around for quite a while. For being an award winning whiskey I had high expectations of balanced taste and warm bourbon flavor profiles which for Gold Zephyr ended at the nose. There is also a lack of clarity in the appearance which may have been my first hint that this would fall short.

Maybe it’s just not for me but for the price of $60 a bottle I would pass on this.

Faith Raspante is a freelance writer and bartender based in Portland, Oregon. A love of craft cocktails and creative mixology led Faith to discover the nuanced pleasure of tasting whiskey and other spirits. When she isn’t behind the bar or in front of a laptop she enjoys boating, home improvement...