Editor’s Note: This whiskey was provided to us as a review sample by Jim Beam. This in no way, per our editorial policies, influenced the final outcome of this review.

Jim Beam certainly has a long and storied history. The Beam family has distilled whiskey for seven generations, since 1795. It wasn’t until 1933 – after Prohibition ended – that the American whiskey company was officially branded as Jim Beam. In the present day, they stake their claim as the world’s best-selling bourbon; Jim Beam Bourbon is what they’re known for, though they have countless expressions to choose from. Whether you want something fruity, spicy, sweet or some combination of all those, they pretty much have you covered.

Jim Beam Repeal Batch is one such limited release, meant to transport tasters back to a time just after Prohibition, paying respects to all the generations of distillers along the way who worked to make Jim Beam a powerhouse in the whiskey realm. Repeal Batch is non-chill filtered, and is supposed to have a fuller mouthfeel and bolder char and oak flavors than regular Jim Beam.

The release marks the 85th anniversary of Repeal Day, the day when Prohibition was repealed in the United States, December 5th, 1933. Many people celebrate Repeal Day as an end to dark times which brought about civil unrest and organized crime; a day that marks a return to care and craft of making alcoholic beverages that taste good. It’s definitely a cause for celebration and a historic day in American history. 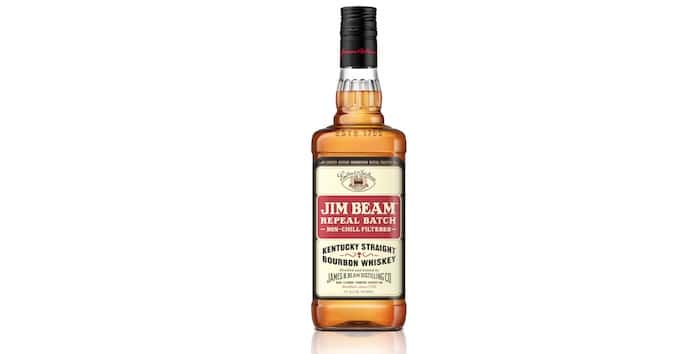 Vital Stats: The whiskey is aged for four years, non-chill filtered and bottled at 43% ABV. It is priced around $18 per 750 ml bottle.

Appearance: It’s coppery in color, bright and golden like a shiny penny. The legs are slightly oily, lingering on the glass in little droplets.

Nose: Buttered popcorn, charred oak and vanilla stand out initially. They’re followed by background whispers of toffee, black pepper, honey, cloves and almonds. It errs on the sweeter side, with an interesting aroma of savory flavors sprinkled in.

Palate: It’s got a nice balance of charred oak and vanilla sweetness that you might find in any bourbon. The mouthfeel does stand out as bolder and more complex than what you would typically find from Jim Beam Bourbon. The texture is a bit oily, and coats the mouth first with heavy char flavor, followed by notes of persimmons, cinnamon, corn, vanilla and butterscotch. The sweetness was balanced nicely, although the char flavor was sometimes a little overpowering.

The finish is spicy with cinnamon and rye flavors, lasting about as long as I wanted it to, maybe 15 seconds. Overall, a solid release at a great price point.

I actually bought this whiskey a few times at my local liquor store because it was very easy to drink and because it's so reasonably priced. My other favorite limited release from Jim Beam is their Distiller's Cut, which I also think is a really good value for the quality of the whiskey, so I buy a bottle whenever I can find it. Its nice because it's decent enough to enjoy straight or with a mixer or cocktail.