Jim Beam has been around pretty much since the beginning of whiskey production in the United States. Their limited-edition Jim Beam Distiller’s Cut acts as the brand’s take on a bold yet budget-friendly bourbon. Master Distiller Fred Noe hand-selected the barrels, and decided to cut out the chill-filtration process, which some say has a huge impact on the flavor of whiskey. During chill filtration, the whiskey is cooled down to low temperatures, so certain chemical compounds within the whiskey will freeze. Those frozen compounds are then filtered out using a dense filter before the whiskey is bottled.

Without the cooling-down process, those compounds (often fatty acids and proteins) are allowed to remain in the spirit, adding flavors that other whiskeys typically wouldn’t have. On the other hand, they also cause the whiskey to become cloudy if exposed to extreme temperatures or evaporation, which could be unattractive to some consumers, even though the whiskey inside is perfectly fine to drink – and Jim Beam Distiller’s Cut is more-than-fine for everyday sipping. 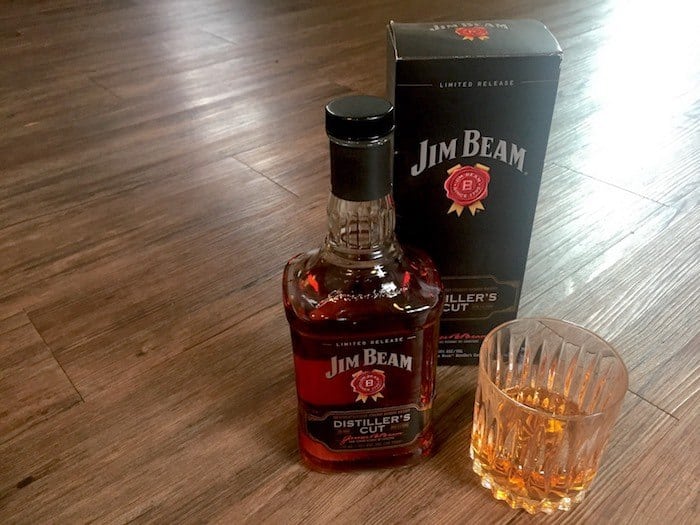 Vital Stats: The label says Distiller’s Cut is a limited release, unfiltered Kentucky straight bourbon whiskey. It’s bottled at 100 proof, and aged 5-6 years. On the back of the bottle, they clarify that the whiskey is “quality screened to remove barrel char pieces from the liquid,” and that this process “does not change or lessen the flavor in any way.” The price is great, retailing for $23 dollars or less.

Appearance: The whiskey is a bold, copper color, with super-thin legs that make shapes like robust, rolling hills on the side of the glass. It turned cloudy when I added ice cubes.

Nose: Typical bourbon smells of caramel and light, charred oak are apparent, accompanied by other aromas of candied mango or passionfruit.

Palate: Distiller’s Cut has all the flavors that I would expect from a traditional, classic bourbon. It’s got bold flavor and complexity to set it apart from other bourbon whiskey blends. There are traditional notes of caramel, vanilla and charred oak, but added tastes of cinnamon, allspice, chocolate and tropical fruit provide added complexity. The smooth start is followed by slow-building rye spice that intensifies and then quickly dissipates for a sweet, oaky finish.

For fans of bourbon, Jim Beam Distiller's Cut is an excellent everyday drinker. The price point on the bottle is a steal, and the whiskey inside is great. It's got a fuller, more well-rounded flavor than other Jim Beam styles, and the mosaic of flavors kept me coming back for more. If I see a bottle of this on the shelf, I'm definitely snatching it right away.