Trey Zoeller, founder and head honcho at Jefferson’s Bourbon, is quite the mad scientist. Zoeller, as part of his experimentation, saw the potential of more refined wood treatment techniques being used in the world of whiskey maturation. He began taking more traditionally-aged bourbon and finishing it with myriad oaken treatments. Here we have the launching point of Jefferson’s Reserve Pritchard Hill Cabernet Cask Finished bourbon, based from their 15-year old stock and then “extra-matured” in Chappellet Winery Cabernet Sauvignon barrels. The final product is a blend of three different bourbons that spent time in these barrels.

In 2015, we tried the predecessor to this unique experiment, Jefferson’s Groth cask finish. Surprisingly, our tasting notes described a delicious bourbon, but not one soaked with wine-like character. Being familiar with Jefferson’s everyday drinking releases, I feel quite prepared to dive deeper to uncover the differences and finish-added nuances in this bourbon. The blendery’s namesake, Thomas Jefferson, was also a bit of an experimental distiller during his post-presidency Monticello years.

Would he have been proud of Zoeller’s achievements here? The quality of this liquid hints toward a ‘yes,’ but the lack of wine character continues with this second experiment in the series. 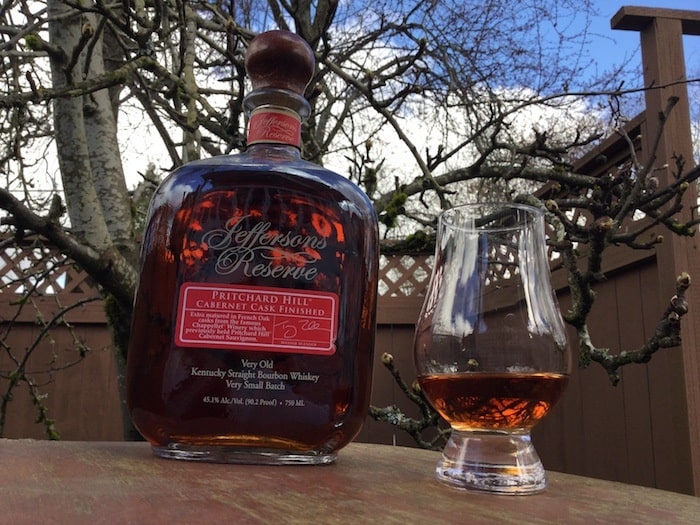 Appearance: Impressive clarity and steadfast legs are present in this intensely deep amber liquid. There is a redness here that one could imagine is derived from contact with purple-stained wood, but it’s a light touch, just enough to make this whiskey visually richer than most. It is pleasure to gaze at, and promotes a sense of welcoming and warmth.

Nose: Shockingly, the acidity and soft tannins one associates with wine are immediately on offer once the nose enters the glass. They play nicely with the leathery aromas brought forth from the whiskey element, and some red stone fruit sniffs I’d usually associate with oxidation seem naturally present here. The more my nose adjusts, the more bourbony it becomes, with notes of cashew, pound cake, and a grassy, earthy note as well.

Definitely a drier, more raw, oak-forward, and less caramelly expression of shelf-standard Jefferson’s Reserve. The problem is, once you take a sip, the ‘wine’ elements evaporate.

Palate: Just as they would in a wine vs. whiskey beverage tasting, the wine elements do not hold up once the full palate becomes involved. The trademark zippy sweetness I’ve come to expect from Jefferson’s is present as soon as it hits the tongue, a bit flabby, but supported somewhat by a clean, fortified heat. I immediately taste dates and apricots, all underneath a prominent note of buttery pastry.

There is a tinge here which reveals itself mid-to-late palate, a brightness verging on acidity, that feels like the expression of the Cabernet kisses. Not wine-like per se, but possessing hints of lemon zest and more of those cherry-like oxidative flavors. The finish is a dry reminder of double oaking, and lingers long with dust and fire.

This is a good bourbon, although the appearance is the main giveaway that it’s spent time nesting in a Cabernet barrel – and you can’t taste appearance. For a well-aged whiskey that’s sippable with few flaws, I plan to happily enjoy the rest of this bottle.

For the price and promise, however, it may fall short to the consumer who is seeking out something with boundary-crossing hybrid wine/whiskey flavors.

437
Shares
8.7k
Views
Share on FacebookShare on TwitterGet Our Newsletter
Read More Whiskey News
Whiskey Review: WhistlePig The Boss Hog VII Magellan’s Atlantic
Cheers to the Dads! Personalize a bottle of his favorite whiskey to create a modern gift for the modern man. Use code: FATHERSDAY20 for $20 off your next order of $100 or more at ReserveBar