Editor’s Note: This whiskey was provided to us as a review sample by Silver Screen Bottling Company. This in no way, per our editorial policies, influenced the final outcome of this review.

Attention Trekkies! Let’s meet James T. Kirk Bourbon. Ok, let’s allow that to sink in for a moment here. Yes, it is a thing.  Under license by CBS Consumer Products, Silver Screen Bottling Company announced last year it was launching a Star Trek branded spirits line. Silver Screen Bottling is a licensing, bottling, and distribution company focused on television, movies, sports, and music. At the end of the day we have a marketing group centering on pop culture and booze. Other products listed by the company include vodka, dark rum, whiskey, and even a beer. A Walking Dead themed beer.

Endeavors such as these usually provoke the cynic in me and I was more than curious as to what was in the bottle. Speaking of which, the bottle design is said to be influenced by Star Trek “behind the scenes” veteran, graphic designer Mike Okuda. And yes, it is a very impressive looking bottle.

Very little is known about this one. With regards to the actual producer, one might guess one of the big distillery groups. The bottle in question that was reviewed is listed as a 12-year-old bourbon whiskey, bottled at 90 proof and distilled in Tennessee. 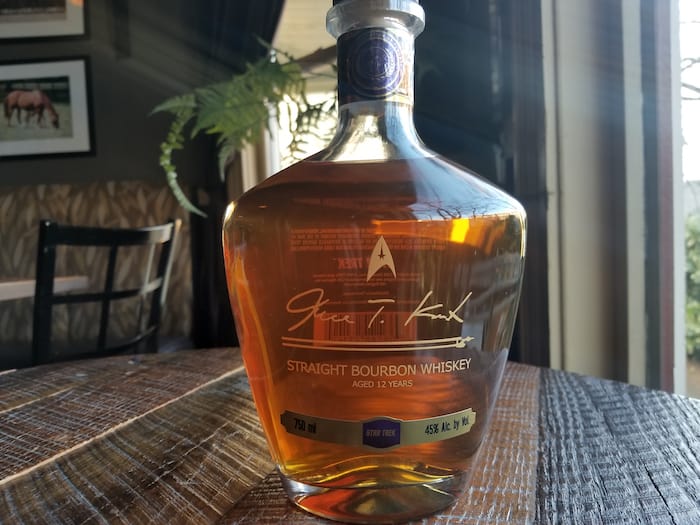 Appearance: Light amber. On the bottle, there’s a James T. Kirk “autograph” as well as various insignias associated with the Star Trek brand.

Palate: Medium bodied, on the sweet side. Think maple and graham cracker. Finishes with a whisper of oak and then is gone.

As a fan of Star Trek, I really wanted to like this bourbon. It's just not good compared to what you want it to be. The whiskey is a tad too sweet, the finish is lacking and generally unbalanced. Is it wrong also that I felt a little insulted that they would pair a sub-par product with such an iconic brand name?