Editor’s Note: This whiskey was provided to us as a review sample by Ole Smoky. This in no way, per our editorial policies, influenced the final outcome of this review. It should also be noted that by clicking the buy link towards the bottom of this review our site receives a small referral payment which helps to support, but not influence, our editorial and other costs.

According to the whiskey’s own website, Ownby was one of the original settlers of Tennessee, who helped beat back the British in the Battle of Kings Mountain and fought in the Revolutionary War as an Overmountain Man. He enlisted at age 17, served six tours of duty and settled in the area surrounding the Great Smoky Mountains.

The whiskey named for Ownby uses the Lincoln County Process, in which sugar maple charcoal is used to filter new-make whiskey before aging, a method also employed by Tennessee distilling leaders Jack Daniels and George Dickel. It is aged in new American charred oak barrels and clocks in at 94 proof. What did I love about this whiskey most before tasting it? Its recipe card included a recipe for the whiskey: neat. Just so you know, their recipe? It’s  3 oz. James Ownby Reserve, neat. I love a recipe that’s not afraid of a healthy pour! Drink whiskey! (And do it responsibly.)

(My materials also included  a recipe for an “Ole Fashioned” and a “TN Gold Rush,” both of which I approve of, but you can look up old fashioned and gold rush recipes and find the same thing.) 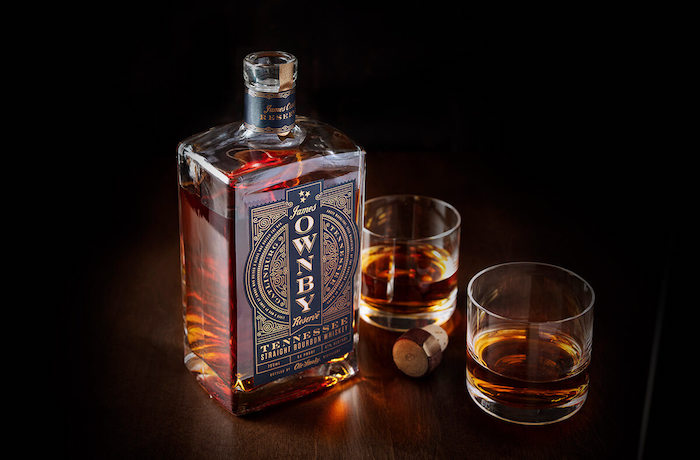 Appearance: Kind of a flat brown, to be honest. It’s got the dullness of a cardboard box tied up for recycling. Also, a slight green tinge.

Nose: Are we ready for fall yet? I think we might be. The early mornings hold a slight chill. And this whiskey brings some of those scents. Granny Smith apples. Fresh tobacco, like smelling an unlit cigarette. Raisins.

Palate: Despite the earnest storytelling and chuckle-worthy recipes that accompanied this whiskey, I find myself really enjoying  it. There’s definitely spice and a little fire initially, but it finishes mellow. It tastes richer than I was expecting.  This is more refined than I expected. Color me pleasantly surprised. It holds back, which I appreciate. It doesn’t share everything at first. It warms quickly, like you want on a fall evening. Did I mention I’m ready for fall? Well, I am. And I want a big glass of this whiskey alongside me as I welcome it in. For about $40, the price is right, too. I wouldn’t pay that much more but I also think it’s worth north of $40 by at least a little…?

What an agreeable sipper! I am surprised by how much I like this, given the moonshiney roots and the slightly overblown marketing.