It doesn’t get much more recognizable than Jack Daniel’s. Jack is the type of whiskey someone who doesn’t know whiskey feels comfortable ordering. Founded in 1864, Jack Daniel’s was the first registered distillery within the U.S., and has consistently released award-winning spirits throughout its many years of productions. The storied Tennessee whiskey producer has maintained one of the whiskey world’s most distinctive flavor profiles, while maintaining its place in the ever-growing whiskey market by finding new ways to innovate.

To this day Jack Daniel’s is one of the best-selling brands in the country. It is based in Lynchburg, Tennessee which is, funnily enough, a completely “dry” county. While the distillery does sell commemorative bottles, there will be no whiskey within. This classic whiskey was known to be Frank Sinatra’s favorite whiskey, his love so strong that he was buried with a bottle of it. Little facts like these contribute to the legacy of this delicious and well-known brand.

The Tennessee Taster’s Selection is a series of small batch experimental whiskeys limited to approximately 24,000 bottles per release. The seventh in the series is the 14E19 “Twin” Blend, my tasting today. Master Distiller Chris Fletcher states, “Our newest additions to the Tennessee Tasters’ series represent the creativity and craftsmanship that Mr. Jack began with more than 150 years ago.”

The 14E19 “Twin” Blend gets its name from the entry date of 20 barrels of Tennessee whiskey and 30 barrels of Tennessee rye, all fifty of which were entered into barrelhouses on May 19, 2014. Master Taster Jessica Hartline was responsible for selecting the fifty barrels to be used in the small-batch run and is credited by Fletcher for having “embodied the spirit with these bottles by complementing the character of our classic Tennessee Whiskey with hand-selected barrels of Tennessee Rye for the Twin Blend.”

My enjoyment of the 14E19 “Twin” Blend tasting I’ve done today may rely somewhat on my history with the brand. I’ve spent many years drinking Jack Daniel’s, and the flavor profile is one that I find the exemplar of a dependable Tennessee whiskey. 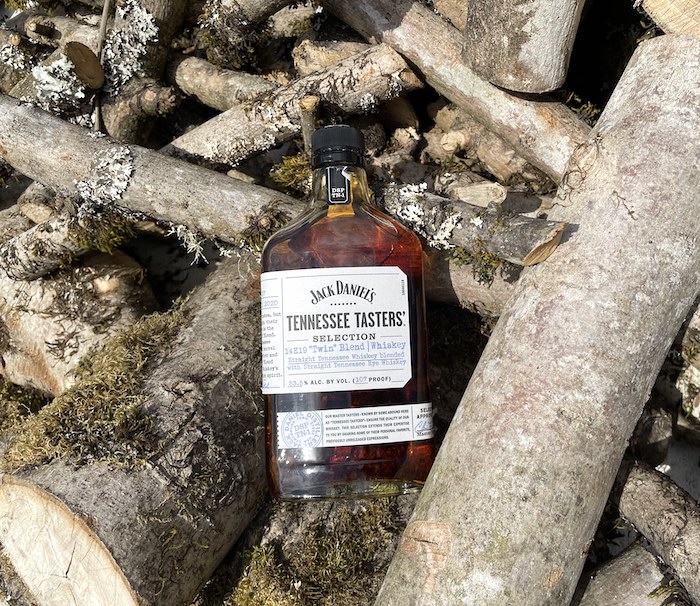 Appearance: Burnt orange in the glass with medium viscosity.

Nose: Of course, there is the distinctive Jack Daniel’s scent right out of the bottle. Sweet brown sugar and vanilla greet the nose.

Palate: Right off the bat there is a sweet, oaky taste. The flavor profile is herbaceous and earthy with slightly bitter notes on the finish that pass quickly to allow the sweet spice of the whiskey to settle.

I’ve said it before and will say it again, Jack Daniel’s is reliable, like that car you know will always start. This 14E19 “Twin” Blend isn’t the most complex whiskey I’ve tasted. It's fairly straightforward and doesn’t play with the profile too much to stray from the distinctive flavor of Jack Daniel’s.

Read More Whiskey News
Whiskey Review: Laws Whiskey House Four Grain Straight Bourbon
3.5
User Rating 3 (4 votes)
Sending
Shares
6.5k
Views
Share on FacebookShare on TwitterGet Our Newsletter
Cheers to the Dads! Personalize a bottle of his favorite whiskey to create a modern gift for the modern man. Use code: FATHERSDAY20 for $20 off your next order of $100 or more at ReserveBar