If the most potent Jack Daniel’s ever released sounds intriguing, then the 2021 Single Barrel Special Release could be for you. Bottled at 137.4 up to 148.3 proof, the Jack Daniel’s Coy Hill High Proof expression undoubtedly has novelty value. The question for whiskey drinkers is whether it’s more than just a “hey Martha” novelty.

Jack Daniel’s Old No. 7, the most frequently sold whiskey in the United States, is released at 80 proof and sells for about $25 a bottle. The Coy Hill High Proof is 75% stronger in terms of alcohol content and sells for nearly three times as much, but comes from the same mash bill of 80% corn, 12% malted barley, and 8% rye.

The special release is also put through the same charcoal filtering that is Jack Daniel Distillery’s hallmark, a process that is supposed to mellow the whiskey. (In order to appeal to most whiskey drinkers, it will probably need mellowing at this alcohol level.)

The 2020 Single Barrel Special Release from JD was its Barrel Proof Rye, which my colleague Faith Raspante gave high marks. Like that whiskey, the Coy Hill High Proof is said to come from the top ricks of the barrel houses in Lynchburg, Tenn. The suggestion is that the high heat in those locations creates an intense interaction with the wood in the barrels – and evaporates enough water to bring up the alcohol content.

The version reviewed here is at the top end for the Coy Hill expression, at 148.3 proof. 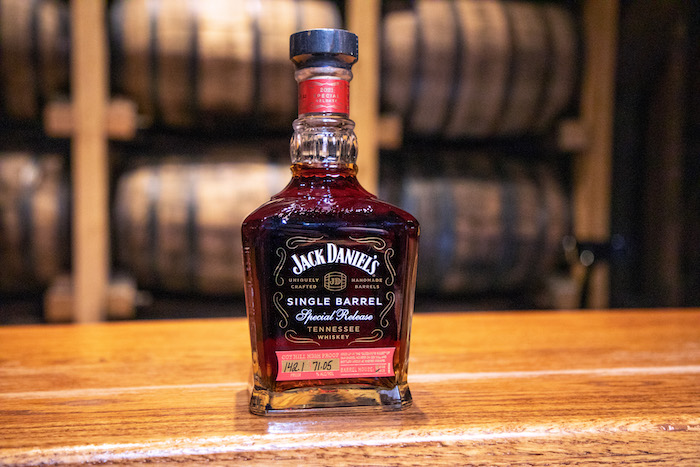 Appearance: Very dark, the color of brown crayon. In a white mug, you would be forgiven for mistaking it for coffee.

Nose: Tangy molasses, cinnamon, blackberries, maple syrup, and maybe a hint of dill and dark chocolate. If you give this whiskey air for a few minutes, it isn’t overly hot. The ethanol is there, but it’s not overwhelming.

Palate: The high heat from the alcohol content comes through in your mouth much more than it does in your nose. Make no mistake: At 148 proof, this is whiskey to put hair on your chest. The sweet and alternately chocolatey/fruity taste of a Tootsie Roll came to mind, plus brown sugar, kettle corn, and Red Hots candies. The finish is sugary and relatively long.

Jack Daniel’s Old No. 7 is known for its sweetness, and the Coy Hill High Proof expression delivered that in spades, too – even at this high alcohol content. If you like JD, you’ll recognize the family resemblance here, no question. Personally, I had to add a splash of water to make this something I wanted to drink. It truly is rocket fuel. Regardless, at $70 a bottle, it’s worth buying this if you find it at your local liquor store. It is a novelty, but it’s an interesting enough of a novelty that you’ll want to share it with friends. Hey Martha, indeed.