I don’t typically drink Jack Daniel’s. I don’t not know Jack, though. Their whiskey is just fine, I think, but not typically one of the bottles I reach for in the cabinet or ask for at the bar (remember bars?). That said, I was pleasantly surprised in the autumn of 2017 by the then-new Jack Daniel’s Tennessee Straight Rye, and have used it in many a Manhattan.  So, I’m Jack-curious, I suppose. But something I didn’t know about Jack Daniel’s was the link between Jack and Frank Sinatra.

I know! I know. I’m sorry. I am a terrible ex-denizen of Hoboken. After all, Hoboken, New Jersey, is where Frank Sinatra was born in 1915 and spent most of his childhood. Not much later in Sinatra’s life, Jackie Gleason supposedly introduced Sinatra to Jack at Toot Shor’s bar in New York, and it was a perfect match.

“This is a gentleman’s drink,” Sinatra would say.

Sinatra was, perhaps, one of alcohol’s early influencers. According to Tales of the Cocktail, in 1955, Sinatra announced onstage, “Ladies and gentlemen, this is Jack Daniel’s, and it’s the nectar of the gods.” The next year, Jack Daniel’s annual distribution doubled from 150,000 cases to 300,000. When Sinatra died, a bottle of Jack was buried along with him.

Jack Daniel’s pays tribute to Ol’ Blue Eyes through their Sinatra Select Bold Smooth Classic Tennessee Whiskey. It’s made in customary Tennessee Whiskey style—filtered through charcoal before going into new charred oak for maturing—but it’s aged in the distiller’s “Sinatra Barrels,” which are scored with deep grooves that permit more contact with the whiskey and oak. This, according to Jack Daniel’s website, brings “rich amber color, bold character, and pleasant smokiness, punctuated by an incredibly smooth vanilla finish.” 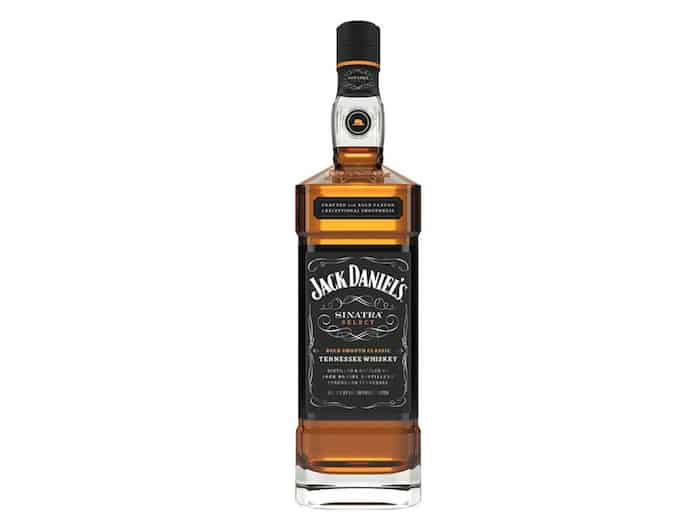 Appearance: Pretty in the bottle: a rich, deep, backlit orange amber. In the glass, a little flatter: khaki color but not khakis, at least not pleated ones.

Nose: Very strong, very sweet, very fruity. This whiskey does not croon. It shouts! What does it shout? “I am fruit! It is fall, and I am honeycrisp apple! Also: mango!” There is—and this is not necessarily a detraction—a hint of…envelope glue. (But not the Seinfeld kind. I hope.)

Palate: On initial sip, this is crackly. It finishes a bit unfinished. Compared to Jack Daniel’s Straight Rye, this rides roughshod. I added a couple of drops of water to it, which smoothed things a touch but also took away any nascent richness. But also like the rye I tried, it becomes less harsh if it sits a while. Maybe it wears you down?

I am loath to mix most expensive whiskies into a drink because I think a high-priced whiskey should be good enough to sip on its own. Maybe it would be, for big fans of either Sinatra or Jack. I appreciate the care and craftsmanship and dedication applied to this whiskey. But in my opinion, this whiskey fares best in a band and not as a solo artist.