Ahh, Jack Daniel’s. What could we say about you that hasn’t already been said? Who among us doesn’t have fond memories of puking you up in a dorm bathroom? Who among us didn’t once feel edgy striding up to the bar, aged 21 years and zero days, to order a shot o’ Jack, neat? “Do you want to start a tab?” the bartender would ask. “A what?” we’d answer.

I’ll stop joking. Jack Daniel’s, of course, is the butt of endless jokes already, and for all that ribbing, it remains the top-selling whiskey in the U.S. by a wide margin. What’s more, the name is embedded in notions of rock-and-roll culture and Americana like no other whiskey. They’re obviously doing something right, whether it’s pure marketing hype or the smooth, mellow character imparted by the signature Lincoln County Process.

Jack’s standard middle-shelf whiskey is made with a fairly typical bourbon-type mash bill of 80% corn, 12% rye, and 8% barley. What makes it Tennessee whiskey and not bourbon is the lengthy filtration through sugar maple charcoal, a step Tennessee distillers have long claimed gives the aging process a jump start. Like bourbon, it’s then aged in new American oak.

This special Jack Daniel’s 150th Anniversary expression, released as part of the distillery’s year long celebration around its age, seems to be made with a similar process: the mash bill and charcoal filtering are the same as for the iconic Old No. 7. The barrels, however, are apparently “slow-toasted.” I’m not totally clear on what that means, but perhaps it indicates a lighter char? It was then aged high up in the barrel house, exposing it to extra heat, for “generations.” Again, we don’t get any additional detail on how long, exactly, that is. 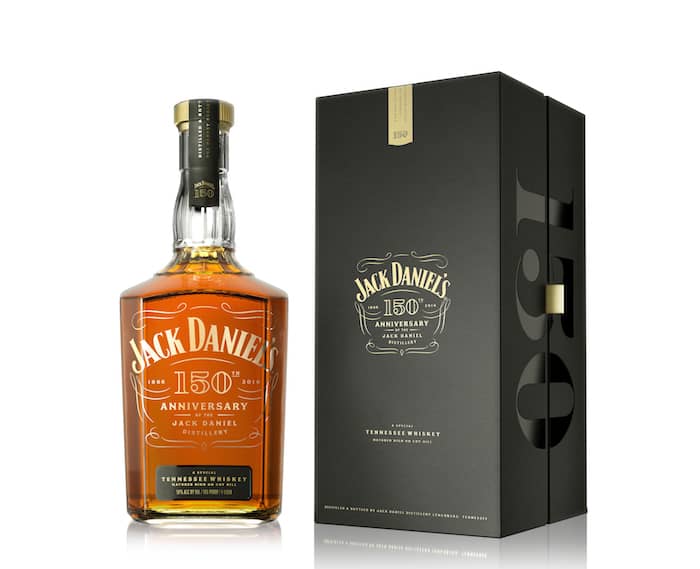 Appearance: Copper
Nose: Strong vanilla and caramel are balanced by fruity apricot, cherry, and orange. There’s a solid underpinning of leather.
Palate: More vanilla opens the palate, along with maple syrup and some baking spice. The palate isn’t cloying by any means, counterweighted by substantial oak and more leather. The finish is nice, although what lingers is a faintly medicinal aftertaste. Mouthfeel-wise, it’s note-perfect, tannic but not drying.

Final Thoughts: All in all, Jack Daniel’s 150th Anniversary is a pretty good whiskey, well-balanced with a good texture. Is it a $100 whiskey? I don’t think so. If you only ever drank Old No. 7, might this taste like the best whiskey on God’s green earth? Perhaps.

538
Shares
3.5k
Views
Share on FacebookShare on TwitterGet Our Newsletter
Cheers to the Dads! Personalize a bottle of his favorite whiskey to create a modern gift for the modern man. Use code: FATHERSDAY20 for $20 off your next order of $100 or more at ReserveBar