Editor’s Note: This whiskey was provided to us as a review sample by J.W. Kelly & Co. This in no way, per our editorial policies, influenced the final outcome of this review.

As soaring demand for craft spirits has opened the door for smaller, local brands to carve out a place in the market, cities across the United States have been rebuilding their pre-Prohibition reputations as hubs for particular styles of distilling, and Chattanooga, Tennessee is no exception.

Once housing about 30 distilleries at its height more than 100 years ago, according to CityScope. the very first recorded distiller and liquor seller – and now one of the most recently resurrected brands – was J.W. Kelly & Co., which just released a new Melrose Rye this September.

Born in Waterford, Ireland in 1844, James Watt Kelly hopped on a boat to the United States at age 19, arriving in New York, then making his way to Nashville, and finally settling in Chattanooga sometime in 1865.

The two-year journey reportedly “exposed him to the world’s most renowned spirits” – which sounds like a luxurious Atlantic crossing compared to the desperate and harrowing voyages nearly 2 million fellow Irish immigrants experienced over the preceding two decades.

Nonetheless, Kelly is believed to have started making whiskey in Nashville before becoming more firmly established in Chattanooga, taking advantage of the economic vacuum in the south just after the Civil War. Kelly’s company is said to have created some of Chattanooga’s most distinctive brands, including Deep Spring that was once emblazoned with a picture of Robert E. Lee leading confederate troops.

The revived J.W. Kelly & Co. is led by Ryan Kohl, his grandfather Ed Kohl, and Joe Griffin, all of whom are on the executive team of Quest Brands, a liquor importing company based in Chattanooga. While J.W. Their mainstay since they began is the Old Milford Straight Bourbon Whiskey, but the latest release is this new rye whiskey.

The whiskey is aged for two years in American oak barrels that have been air-dried, and then finished for an unspecified amount of time in casks that previously held Amarone, a style of rich, dry Italian red wine. The finished product comes in at 92 proof and sells for about $60 per bottle. 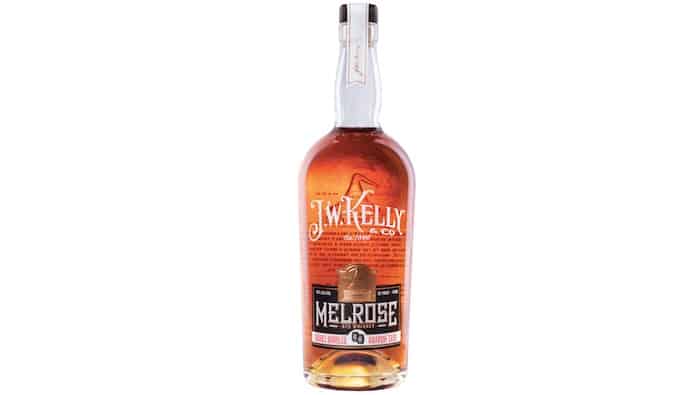 Appearance: In a glass, Melrose rye has a bit of a darker color than the median for whiskey giving it a reddish, coppery hue, but it is still well within the realm of normal.

Nose: The first aroma that enters the nose comes with a heavy dose of the clove and ginger combination that I find typical of rye giving it an earthy, spicy, and slightly tangy scent. In this case, the combination also includes a touch of vanilla along with a pronounced note of dried stone fruit, which add an interesting coolness to the bouquet that reminds me of spearmint. The spices fade to make room for a sherry-like combination to take center stage, characterized by notes of prunes, raisins, and a bit of salt, with light touches of orange and molasses.

Palate: Entry into the mouth is unusually sweet, hitting the tongue like a sweet caramel sauce with a bit of a smoky character and just faint touches of dried fruit. That sweetness seems to persist for an unusually long period of time, all the while spicy notes of cloves, nutmeg, and just a bit of ginger are building up almost imperceptibly until they become a moderate roar on the tongue. Swallowing sends a stronger wave of those spices rushing through the mouth. That then fades into a sweet finish with flavors of raisin, molasses, oak, and a touch of orange with occasional flares of mild spice.

While I’ve always considered myself a sweet tooth in terms of whiskey, Melrose may be one of the rare drams that goes beyond my limit. From the first sip, the sweet notes overpower all of the other elements of this whiskey, particularly raisin, caramel, and molasses. That’s not to say Melrose is bad or lacking complexity – other flavors like clove, ginger, and oak manage to punch through at times ­– but it’s akin to a decadent, rich dessert that’s only satisfying to enjoy in small proportions from time to time.

3
User Rating 3.2 (10 votes)
Sending
19
Shares
3.1k
Views
Share on FacebookShare on TwitterGet Our Newsletter
Cheers to the Dads! Personalize a bottle of his favorite whiskey to create a modern gift for the modern man. Use code: FATHERSDAY20 for $20 off your next order of $100 or more at ReserveBar