Editor’s Note: This whiskey was provided to us as a review sample by Hudson Whiskey. This in no way, per our editorial policies, influenced the final outcome of this review. It should also be noted that by clicking the buy link towards the bottom of this review our site receives a small referral payment which helps to support, but not influence, our editorial and other costs.

Today, Hudson Whiskey is one of craft distilling’s elder statesmen. But when Ralph Erenzo resurrected the Tuthilltown distillery in 2003, he was the first to produce whiskey in New York state since prohibition. Despite the recent rebrand which packages Hudson’s products with a simple, attractive design deliberately evoking the NYC subway system, the whiskey itself is no city-slicker. It is still produced upstate at the Tuthilltown Distillery in Gardiner, New York, and Hudson makes it a point to mention their relationships with local grain producers. Perhaps Hudson’s biggest impact on New York is Erenzo’s lobbying efforts for the 2007 Farm Distillery Act which helped kick off the statewide proliferation of microdistilleries.

Although Hudson’s acquisition by William Grant & Sons in 2010 means that they are no longer independent, there is a fair argument that the resources the Scottish parent company affords might actually benefit the “craft” status of Hudson’s products. A look at their recent limited release shows that the new business arrangements haven’t stopped the flow of creative juices at Tuthilltown.

With age comes… aged whiskey. Most craft distilleries have not been in operation for all that long and therefore do not yet have the ability to distribute the matured products of their more established competitors. While the Hudson brand is not itself of legal drinking age, they’ve been around longer than many of their peers and are therefore able to release a seven-year age statement bottle. The name Four Part Harmony comes from the mash bill which consists of 60% corn, 15% rye, 15% wheat, and 10% malted barley sourced from area farms. The resulting whiskey is pot-distilled, and Kosher certified. 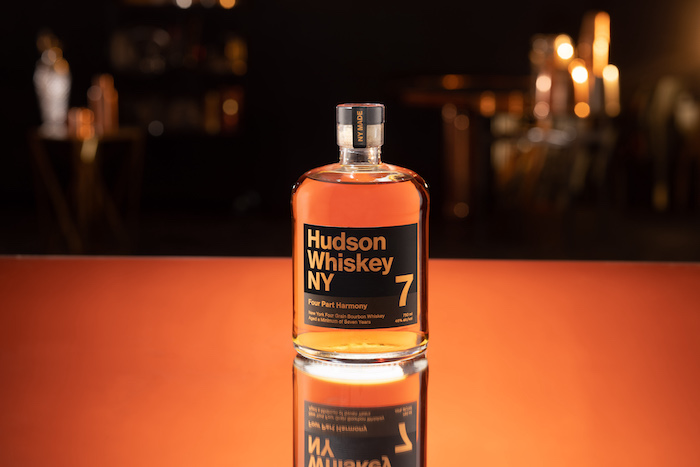 Appearance: A rich honey color, not incredibly viscous but by no means thin

Nose: Cornbread and jam, cherry cola. That may sound like I’m describing a “sweet” smell but that’s not the case at all. These are full, rich aromas.

Palate: Quickly opens into a full flavor of fresh baked crackers. The spiciness you’d expect from rye comes as black pepper that fades into toasty, toffee, and raisin notes lingering on the finish

This one’s for the grain geeks, but most other drinkers will find something to like here as well. Before tasting, I promised myself not to use the word “balanced” in describing a whiskey that has “harmony” in its name. I could hold myself to that and break out the thesaurus, but I’d be lying to myself and, worse, to you. This is a mature, balanced pour that allows a moment for each of several complementary flavors. This is a very pleasant sipper and hopefully bodes well for the future of aged craft whiskeys.