For many people in the San Francisco Bay area, the magnitude 6.0 earthquake that jolted the area around Napa on August 24, 2014, was a once-in-a-generation fright (or thrill) that nearly all walked away from after a sigh of relief.

But for several barrels of whiskey aging at Prohibition Spirits Distillery a few miles away in Sonoma, the quake knocked them off of their ricks and left them hanging “precariously in the balance” without falling, as we previously reported.

The unconventional shaking these barrels got that day sent the whiskey within on a different trajectory from the rest in the rickhouse, becoming what is now Hooker’s House Epicenter Whiskey.

After that event, distillery staff reportedly isolated these barrels for a special release, allowing them to experience 500 “micro” aftershocks over the next nine months that further agitated these barrels, according to the description on the bottle – though it’s unclear to me how the other barrels in the rickhouse didn’t experience these same vibrations.

Epicenter is part of a line of whiskeys from Prohibition Spirits – including Cohabitation – named after General Joseph “Fighting Joe” Hooker, who briefly commanded the Union’s main army in the American Civil War. While his reputed philandering often earns him credit for popularizing the term “hooker” to refer to a prostitute, he is more noteworthy to history for leading a stunningly lopsided defeat at the Battle of Chancellorsville that conversely launched Confederate General Robert E. Lee to legendary status.

Prior to the earthquake, the Epicenter barrels were supposed to be part of a high-rye bourbon, according to Caskers. That may imply that Epicenter is primarily corn and rye, but the bottle only labels it as “distilled from bourbon mash.” Caskers goes on to note that Epicenter is finished with French oak staves before being bottled at cask strength, or 112 proof. 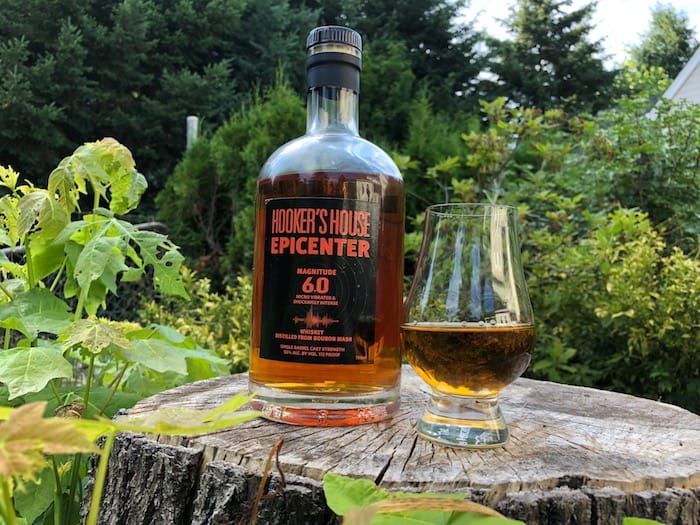 Vital stats: Epicenter is made from a bourbon mash that was slated for a high-rye bourbon before being vigorously shaken by a magnitude 6.0 earthquake. These were then separated from other barrels, finished with French oak staves and released as a single-barrel, cask strength whiskey at 56% ABV. A bottle costs roughly $45.

Appearance: Packaged in a plain and unremarkable bottle, Hooker’s House Epicenter Whiskey has a reddish bronze hue before its poured. When it’s in a glass, it takes on the color golden amber color of a typical whiskey with just a touch of red.

Nose: The initial sniff above the glass packs a punch that hints at its higher-than-average proof, emitting a potent scent characterized by hay, cinnamon, and a touch of anise. Nevertheless, the bouquet overall is fairly sweet, with a rich caramel overlayed with notes of apple and lilac.

Palate: The first sip hits the tongue with as powerful of a wallop of spicy and sweet as it delivers to the nose. Starting off like a sweet, mild-mannered caramel with a touch of coffee-like bitterness, it takes barely a moment for cinnamon and pepper to begin dominating the overall flavor profile. At least for the first few sips, those spices continue building in intensity on the tongue for as long you can bear to hold it there – though it gets easier as you continue to sip.

Swallowing sends a rush of those spices through the back of the mouth followed by a moderate burn that spreads throughout the mouth, reaching its highest intensity in the corners and roof of the mouth. That burn eventually fades to the mild caramel caramel flavor with notes of spicy cinnamon flaring for the next minute. Adding a dash of water drastically brings down the spiciness, but leaves primarily just the caramel save a new touch of smoky oak that I hadn’t tasted before.

Reading the product description, it sounds like Hooker’s House Epicenter Whiskey must have been impacted somehow by its experience of the earthquake, but that uniqueness doesn’t seem to carry through on the palate. Either it’s generally so intensely spicy or so intensely sweet that any subtlety or unique attributes are difficult to detect.

While not terrible, it doesn’t offer an experience that’s above average, which leaves the earthquake’s influence seeming more gimmicky than real.