Editor’s Note: This whiskey was provided to us as a review sample by Cooper Spirits Company. This in no way, per our editorial policies, influenced the final outcome of this review. It should also be noted that by clicking the buy link towards the bottom of this review our site receives a small referral payment which helps to support, but not influence, our editorial and other costs.

Have you ever had Rock and Rye? Even heard of it? To some folks it’s a mainstay but to others it sounds like some off brand flavored rye whiskey. Well, it is rye whiskey and it does have some things in there for flavoring, but it’s really more of a bottled cocktail. Like many wonderful things, prohibition killed it off pretty well but it is back and growing ever more popular.

Hochstadter’s Slow & Low Rock and Rye comes from the same company that was behind St. Germain and Crème Yvette. They obviously know what people like – St. Germain has been called the most influential cocktail ingredient and still is found on cocktail menus at all kinds of bars. Slow & Low was bottled beginning in 2013 and is one of several rock and ryes available. Pennsylvania, for example, is a particular hot spot with Jacquin’s Rock and Rye, having sold more than 3 million bottles in 2017!

Rock and rye finds its roots in the bars and pharmacies of the youthful United States during the 1800s. At its most basic it is rye whiskey that is sweetened and flavored. Basically, it’s an old fashioned, which is why it caught on (you can’t argue against the beautiful combination of whiskey, sugar, bitters and water). At bars, you would often be served the rye whiskey with bitters and orange already added/infused and add your own rock candy. In pharmacies, it was prescribed as a treat-all that just happened to taste really nice. In those cases, additional herbs and spices (such as horehound) were often used to expand the medicinal properties, or at least make it sound more medicinal.

Slow & Low is named after the process of gently heating whiskey to melt the rock candy without evaporating the precious alcohol, mostly used in larger format productions. That rock candy is less sweet than traditional white sugar, and brings the right amount of balance to the rye spice. Hochstadter’s also uses raw honey from Pennsylvania, navel oranges and bitters. They claim that the oranges (from Florida) are air dried and that the bitters are ‘Angostura-style.’

However, in their home page video the oranges appear freshly sliced and their online marketplace references Angostura specifically. I’m not second guessing that what they’re doing is of quality, but I am questioning their exact process. Changes in those ingredients could potentially produce significantly different flavors.

I also received a couple of their cans, which I highly recommend. They are the equivalent to a double old fashioned, and when pulled straight from the fridge go down dangerously easy. My first experience with any rock and rye was making it in house at my first bar. I was always surprised at how easy and wonderful that ‘old fashioned’ was. While it’s tough to top that hand-made beauty (you can make this at home, by the way) Slow & Low does a pretty solid job of making something available to everyone. I’m a fan of Rock and Rye and am happy to have gotten a chance to try this one out. 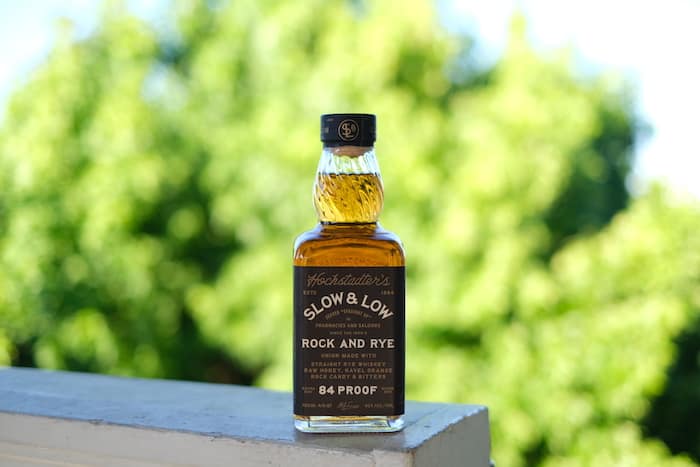 Nose: Sweet vanilla and candied orange peel with a spiced apple undertone and a bit of tootsie roll.

Palate: Surprisingly or not, it tastes just like the ingredients described on the bottle. Spice and vanilla are upfront, followed by a lingering honey note. Candied orange matches the nose and there is an underlying base of spice and wood. The honey sweetness is a bit cloying, but otherwise it is well balanced for a bottled cocktail style beverage.

I happen to love Rock and Rye as we made a homemade version at the first bar I worked at. This one has the flavor down pretty well in my opinion, but the sweetener is cloying at room temperature. Putting it on ice or having it ready to go from the fridge makes it very enjoyable, even with the relatively high proof.

I’d recommend it as a great ready to drink old fashioned, as long as it’s cold!