Editor’s Note: This whiskey was provided to us as a review sample by Hotaling & Co.. This in no way, per our editorial policies, influenced the final outcome of this review. It should also be noted that by clicking the buy link towards the bottom of this review our site receives a small referral payment which helps to support, but not influence, our editorial and other costs.

The Hirsch brand has changed ownership multiple times, and now it’s found a home with Hotaling & Co., the scion of Anchor Brewing. With new ownership, the brand is undergoing a whole new revamped look. The first whiskey released under Hotaling & Co. is the kick-off to their “Select Whiskeys” collection. Hirsch The Horizon is about moving forward versus a final destination, and Hotaling & Co. is calling on all whiskey enthusiasts to follow them on this journey.

To convey “The Spirit of the Journey,” Hirsch unveiled a new logo; a sextant with the Hirsch name incorporated. The packaging for the reintroduction is a big departure from the usual Hirsch bottlings. The award-winning branding and packaging design team at Stranger & Stranger has even left a hidden message on the bottom of the flask-shaped bottle. The Horizon will catch your eye on the shelf for sure.

As a fan of Hirsch, I’ve been wondering about the fate of the whiskey, so let’s see how The Horizon holds up… 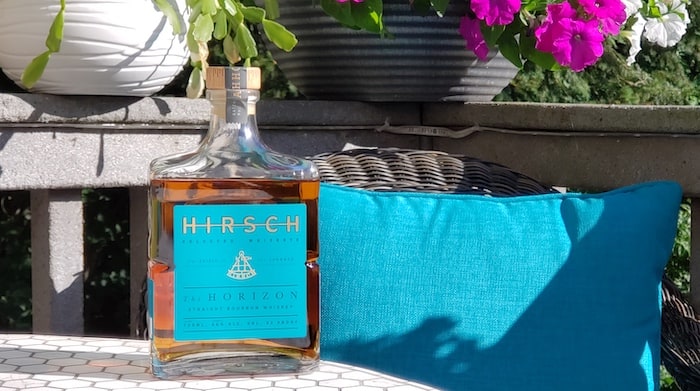 Nose: At first, I get a quick whiff of a sour mash that blends with a bit of lemon scented nail polish remover. Following this is vanilla bean scones with a sugary glaze. However, it turns again and I get the smell of pickles (I truly hate pickles). The nose is just baffling.

Palate: The mouthfeel is soft, but has a spicy burn from the rye. It actually is a bit sour on the tongue. The vanilla bean from the nose lingers on the breath with the faintest amount of oak. The rye spices are distinctive with nutmeg, clove, cinnamon, and allspice. It has a slight harshness from the head and tail cuts, but thankfully it doesn’t overpower the whiskey. It warms the throat, yet you won’t be sweating since it doesn’t just sit in the belly.

While it smells strange, it tastes decent. I wasn't sure what to expect, but it's more down-the-middle than an outright wow. Since it is the first in the new "Selected Whiskeys" collection, I am curious to see how the adventurer theme plays out, as this one was more nautical, but in their branding shows a lot of hikers. While I am holding onto my other Hirsch bottlings for myself, I would bring The Horizon to share with friends.