Editor’s Note: This whiskey was provided to us as a review sample by Hillrock. This in no way, per our editorial policies, influenced the final outcome of this review.

Hillrock Estate Distillery, based in the Hudson Valley region of New York, is, as the name implies, an estate distillery. While there is no formal definition of what that is exactly, one can imply a sense of it following in the lines of what some wineries do as they grow grapes, harvest them and make wine all on site amongst the grounds of their property. In this you have an understanding of what Hillrock is.

Hillrock describes itself as being one one of the few “field-to-glass” whiskey producers in the world, and is said to be the first U.S. distillery since before Prohibition to traditionally floor-malt whiskey on site from natural-grown estate grain. In keeping with the above philosophy of estate, the grounds feature an 1806 Georgian house overlooking the distillery and 100 acres of farmland growing corn, as well as heirloom varieties of rye and barley.

The Hillrock Estate Distillery Single Malt, which is the focus of this review, is a whiskey we first visited with in 2015. The product in the pretty bottles since that time has seemingly evolved – what you have is that estate grown barley that’s “traditionally smoked” in their on-site Malthouse with imported peat from Scotland for approximately 12 hours prior to distillation.

The American single malt whiskey is then aged in new charred American oak barrels, before being transferred to barrels which previously held Hillrock bourbon. Finally it is finished in a combination of ex-Olorosso and Pedro Ximenez barrels before bottling. Total age time is said to be around six years. Whereas our review some years ago came from barrel 8, we are up to barrel 29 for this 2019 go around. 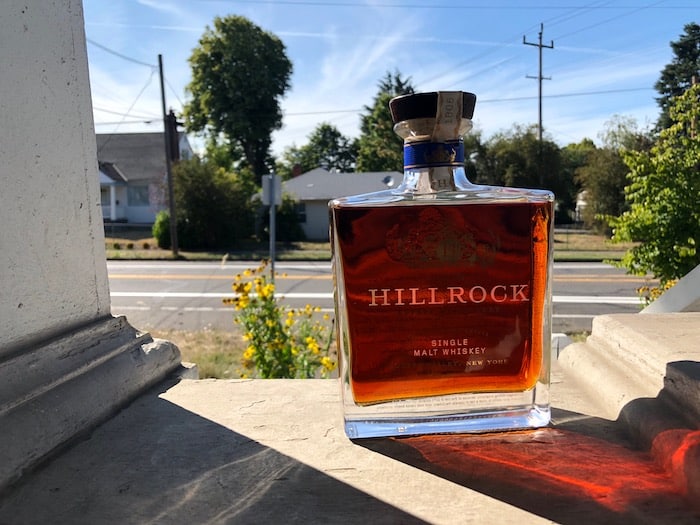 Appearance: Warm, lighter brown color with some hints of orange expression. Nice legs in the glass.

Palate: Initial bursts of baked bread, spices, gingerbread, molasses and toffee that evolve into marzipan, sugar cookies, molasses, and black pepper. A miid finish that is a bitter bitter and sweet at the same time.

The Hillrock Estate Distillery Single Malt is a very solid example of an American single malt that is made using traditional whiskey making practices. The characteristics of the Pedro Ximenez cask aging is apparent here, bringing forward a range of sweeter notes that are accented by some spice from the ex-Oloroso sherry cask aging and some smoke from the peat influence. This trends more towards a desert style whiskey, perhaps best enjoyed after dinner alongside a favorite treat.