Editor’s Note: This whiskey was provided to us as a review sample by High West. This in no way, per our editorial policies, influenced the final outcome of this review.

High West Yippee Ki-Yay is a blend of three straight rye whiskies. It was produced by the creative minds at High West, a distillery that began with humble roots when it was founded in 2006 by David Perkins and his wife Jane. After visiting the Maker’s Mark Distillery in Kentucky in 2001, David became interested in the fermentation and distilling process and was inspired to learn more. As a former biochemist, he saw similarities between biochemistry and the chemistry involved in producing a great whiskey, and it was then that the dream was born, the idea that he would own his own distillery one day.

In 2004, David Perkins and his family relocated to Park City, Utah. They chose Park City because of David’s love of the Wild West and, with Utah having such a scarce history of whiskey distilleries, it seemed like the perfect place to begin this exciting new adventure in their lives. In 2006, High West became Utah’s first legal distillery since 1870. They began distilling in 2007. What all began with one man’s dream, has continued to grow and flourish ever since. That once humble, small operation that begin inside of a 250-gallon still and Saloon in downtown Park City, Utah, has now grown to be an internationally recognized brand with four unique locations.

Today, the Saloon continues to operate in Park City, and is a must-see if you ever find yourself in that neck of the woods. In 2015, High West opened their distillery in Wanship, Utah. There they offer whiskey tastings, pairings, and tours. Their Nelson Cottage offers unique whiskey-paired dinners, and their Saloon at the Salt Lake City Airport allows for some last minute travel tastings of all that High West has to offer.

As previously mentioned, this is a blending together of three straight rye whiskies that is then finished in barrels that had previously held California vermouth and Syrah wines. The straight ryes herald from MGP (95% rye, 5% barley malt), Barton (53% rye, 37% corn, 10% barley) and High West itself (80% Rye, 20% malted rye). The actual percentages of each rye in the mix is a secret, and the entire thing is bottled at 92 proof. 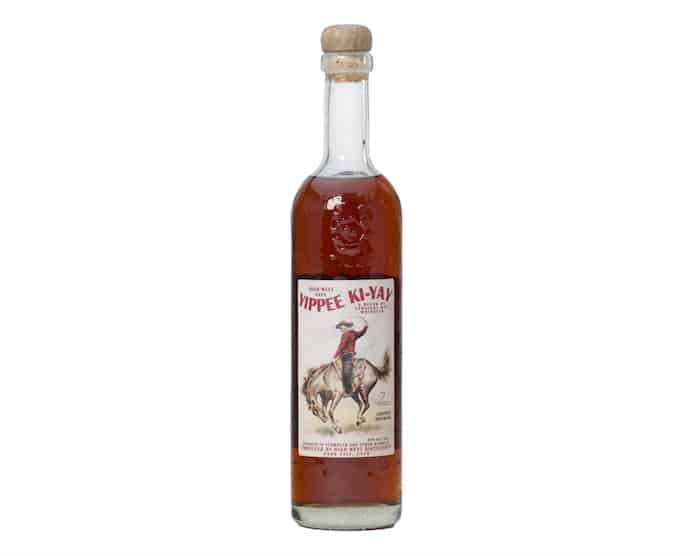 Vital Stats: A blend of straight rye whiskies. Aged for 2-16 years in new, charred, white American oak barrels; then finished off in French oak barrels that were previously used for vermouth and Syrah wine. Priced at about $80 for a 750 ml bottle. 46% ABV. 92 Proof.

Nose:  Sweet, dried fruits and flower fields. The aroma of herbs and spices fill my nose, comforting earthy smells of smoked warm wood, and something familiar like wormwood or sage. I’m reminded of those delightful little boxes of Crackerjacks, with notes of caramel, toffee, and buttered popcorn.

Palate: Chocolate covered tangerines and other dried fruits. It has a dry nuttiness and a woody aftertaste to it, with a rich sweetness that lingers. Like a sugary but tart cherry pie, followed by a bitterness that had me thinking of unsweetened dark chocolate or raw coffee beans.

Very wine forward with bold, dark fruits and peppery spices. The way the different flavors mingle and intertwine reminded me of a fruity, mixed drink. I feel like this High West Yippee Ki-Yay Whiskey would make a pretty tasty Manhattan.

Although I probably wouldn't care to try it again, I can see other people really enjoying it. Aging their unique blend of rye whiskies in wine barrels gave it a plethora of fresh, fruity, floral notes from the Vermouth and Syrah that might actually have you shouting "Yippee Ki-Yay" when you sip it!