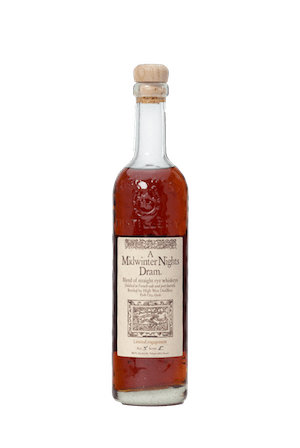 Utah is a complex and, more often than not, stunningly gorgeous place where contradictions mingle and clash. Located at over 7,000 feet above sea level in Wanship, Utah, High West Distillery sits 25 minutes from Park City and 40 minutes from Salt Lake City in an almost unimaginably beautiful region of the country. Beginning operations in 2008, High West’s whiskey portfolio has maintained a decidedly rye-heavy lineup, with most of the actual spirits used in production being sourced from outside of Utah. Following the growing trend of beverage giants acquiring successful independent producers, High West was purchased by Constellation Brands in late 2016.

A Midwinter Night’s Dram is a seasonal release from High West which the producer describes as “(a) limited release of High West Rendezvous Rye finished in French oak port barrels.” In keeping with a great number of other sourcing and blending operations, High West keeps individual details regarding the specific blend makeup regarding this whiskey a secret while teasing out morsels of information.

What ends up in the bottle is MGP-souced straight rye whiskey featuring a mash bill of 95% rye and 5% barley, along with a duo of spirits sourced from Barton Distillery in Kentucky. The first Barton mash bill weighs in with 53% rye, 37% corn, and 10% malted barley, while the second consists of 80% rye, 10% corn, and 10% malted barley. The strong influence from the port barrel finishing is what defines the final product, though new charred American oak barrels are utilized as well. No age statement is provided, though High West claims this dram to be a blend of spirits from five up to 19 years of age. A Midwinter Night’s Dram is not chill filtered.

Vital Stats: 49.3% ABV (98.6 proof), no age statement, blend of straight rye whiskies, limited seasonal release available from around $90 to over $200 depending on regional availability.

Palate: Layered and full. Warm and silky mouthfeel. Bold, bitter, and sweet all swirling together. It is hard to truly denote which hits first, but there are waves of tart cherry, toffee, cocoa, white grape juice, barleywine, dill, raspberry jam, and cherry cola late. The finish transitions seamlessly with bitter dark fruit notes, port, and further cola flavors lingering after the medium burn.

I found it easy to see why this seasonal release has been gathering a following. With rye seemingly saturating the whiskey landscape as of late, it takes a distinct voice to stand out from the crowd. With A Midwinter Night’s Dram, High West presents layers of flavor that are pleasing and appropriately complex, showcasing the finishing. There is a definite identity to the dram that is endearing and absolutely draws me back to the bottle. I find this characteristic to be a testament to any enjoyable whiskey. If I don’t want a second glass, that first encounter must not have made much in the way of a good impression.