Way back in the early 2000s, High West Distillery’s first home was a converted livery in beautiful Park City, Utah. That building that sits at the end of a Park City Mountain ski trail, appropriately named Quit N’ Time, is bathed in some of the best snow in the US, and neighbors the easy-going, fixed-grip Town Lift. How could they not become the world’s only ski-in distillery?

Things have changed for High West since the early times. Nowadays the production distillery is 16 miles north-northeast in Wanship, UT, and the pot still has grown from 250 gallons to 1600. The original is branded a gastro-distillery, so while you can take a tour and see the baby still, grabbing dinner is more the point of this location. It’s been voted the best food in Park City by residents, and the saloon was even a semi-finalist for a James Beard Award.

Despite the facilities, High West has never been shy about being a whiskey blending and bottling operation. Their whiskeys are just starting to become their own. Up until two years ago, High West only made their clear spirits: 7000′ Oat Vodka and Silver Western Oat (which technically is a whiskey from kissing the inside of a barrel, but doesn’t spend much time there).

As of this writing, their Rendezvous Rye, Campfire, and Double Rye all contain a minority percentage of High West-produced juice. The Bourye hasn’t crossed that line just yet, and remains all MGP liquid. For those that don’t know this version of their whiskey, Bourye is a “premium blend of rich bourbon and rye whiskeys,” with the name being a combination of “Bou” for bourbon and “rye” the rye. 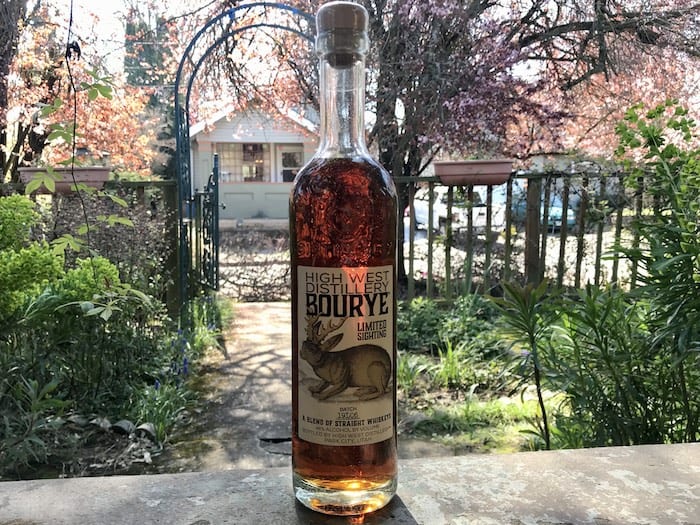 Appearance: This spirit is medium-light red gold in the glass and quickly forms medium-fat legs.

Palate: Smooth-bite push-pull on the palate – the approach is ripe apricot, then sandalwood spice curling around the edges of the tongue. Bright, clean lemon peel bitterness lands on the mid-palate, giving way to forest-floor for the finish.

Solid and approachable, I this whiskey will make a lot of drinkers happy. Sweetness for the bourbon lovers, spice for rye heads, united (quite literally) in a gentle dram. Maybe I've been playing too long in the barrel proof part of the sandbox, but this one is dangerously drinkable.