Editor’s Note: This whiskey was provided to us as a review sample by High Peaks Distilling. This in no way, per our editorial policies, influenced the final outcome of this review.

High Peaks Distilling is a distillery located in the Adirondack Mountains of New York. High Peaks calls themselves a “brewer’s distillery” because the founder, one John Carr, came from a background of making beer, specializing in malt. He cut his teeth brewing for decades at Adirondack Brewery, reportedly perfecting the “complex art of malt fermentation.”

Carr and High Peaks head distiller Aaron Koch are said to take after Scottish tradition, distilling malts in single copper stills. They also practice batch distillation. Carr, in fact, worked with a company out of his home state “to build a still with a tall, slender column” for his whiskeys. The mash for High Peaks’ spirits is brewed and fermented at Adirondack Brewery, and the resulting spirit is aged for a minimum of two years.

High Peaks Cloudsplitter, an American malt whiskey aged in European and American oak, is thus the pinnacle of all of these techniques and ideas bottled up. The result is a clean whiskey that showcases the nuances of malt. It’s named after the tallest mountain in the Adirondack Mountains in New York, Mount Marcy, which tops out at 5344ft above sea level. The spirit is displayed in a bottle with a gorgeous illustration of the Adirondack Mountain Range and mine also came with a wooden display box. 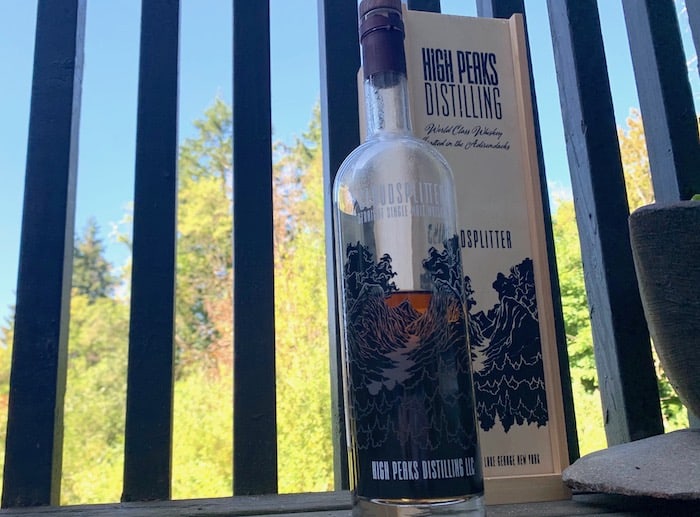 Appearance: Deep amber with nice thick legs. Viscous, but not syrupy. Just the right amount of structure and rich color.

Palate: Notes on the front end are softer than it’s bold finish. It’s only 46% abv, but I can definitely taste the astringency from the alcohol evaporating off my tongue when I take a breath. Anise, clove, caramel and vanilla make for a sweeter middle ground, with spicy cinnamon and rye notes tying everything together in the background. Charred wood, slate and leather create a rugged back-end that lingers with licorice and oak. There’s an effervescent smokiness throughout that brings peat and malt to the front of the palate, rising again in the middle and crescendoing into the finish.

The soft front end and bolder rugged notes at the end are a great representation of the terroir of the Adirondack Mountains of New York. The slate and stone flavors compliment the sweeter side of the spirit to create a balanced, approachable whiskey that's easy to sip neat, on the rocks or in a craft cocktail.

4.0
User Rating 5 (1 vote)
Sending
27
Shares
761
Views
Share on FacebookShare on TwitterGet Our Newsletter
Cheers to the Dads! Personalize a bottle of his favorite whiskey to create a modern gift for the modern man. Use code: FATHERSDAY20 for $20 off your next order of $100 or more at ReserveBar