Editor’s Note: This whiskey was provided to us as a review sample by Heaven’s Door Spirits. This in no way, per our editorial policies, influenced the final outcome of this review. It should also be noted that by clicking the buy link towards the bottom of this review our site receives a small referral payment which helps to support, but not influence, our editorial and other costs.

And while that sounds like heaven, the name has a different source.

Of course, Bob Dylan is an American icon. His musical career has spanned seven decades and many genres, from his first album in 1962 to ongoing new musical releases. His status of being a singer-songwriter had a tremendous effect on the entire music industry, and he was honored with a Nobel prize for literature in 2016. The company’s namesake song “Knockin’ on Heavens Door,” while covered by many bands, is a Dylan original.

Now he’s added whiskey to his repertoire. Dylan co-founded Heaven’s Door Spirits in 2018 with Marc Bushala, co-founder of Angel’s Envy. The label sources whiskey from various United States locations, then re-ages and blends for their expressions. According to the company, Dylan actively tastes and selects barrels for the finished products.

That’s not the extent of his direct contributions. The bold black designs on this bottle and the main collection are not so much the doors to heaven but gate designs Dylan makes in his ironworks studio – when he’s not making whiskey and music. The paintings adorning the bootleg series bottles are also supplied by Dylan.

The Master Blender’s Edition adds a robin to the top of those gates – in honor of this collaboration with Redbreast. Redbreast Whiskey has had a long history in Irish whiskey, and is currently owned by Irish Distillers Limited and produced at the Midleton distillery. Their signature style includes heavy sherry finishing on their whiskies – all to the benefit of this collaboration.

The Master Blenders in question are Ryan Perry at Heavens Door and Billy Leighton of Redbreast. To make this expression, they took straight bourbon that Heaven’s Door had aged 10 years, then finished it for 15 months in Redbreast barrels that had previously held sherry. It’s Heaven’s Door’s very first collaboration bottle, and a first collaboration of this nature for Redbreast. It seems to have paid off – the whiskey was given a double gold at the 2021 San Francisco World Spirits Competition.

The limited release Master Blender’s Edition joins the ranks of award-winning whiskies at Heaven’s Door Spirits. So far the company has released a core collection of three whiskies (which we’ve reviewed here), a yearly bootleg series in ceramic bottles, and three other limited releases. Their next big step will be the production of original product at their Nashville distillery, slated to open later this year. 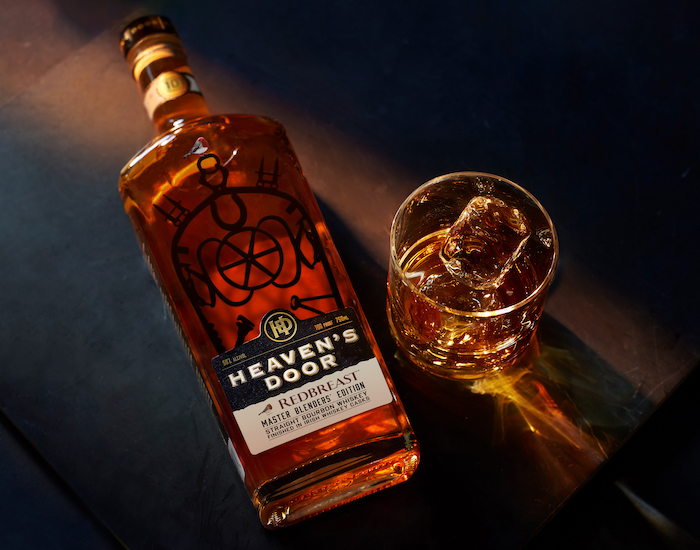 Appearance: Dullish toffee, a few quick legs are followed by many slow legs.

Nose: Bitter cocoa and vegetal snap peas come out first, leading into intense cinnamon with some saline. As it warms, nutty peanut butter comes through.

Palate: Thin and soft in texture, starts spicy but not hot. The sip then lightens into the sweetness of oatmeal raisin cookies, and explodes with the sweetness of white chocolate and caramel. A hint of tobacco on the end grounds the flavor.

I always go into celebrity spirits with a bit of trepidation – there are some real disappointments out there. So this was a nice surprise – though it really shouldn’t have been, considering the all-star team that brought it together. It’s fairly candy sweet but really pleasant and nice to sit with despite a lack of much complexity. Redbreast has a very distinctive mouthfeel that I feel comes through in the softness here. I really enjoyed this, but I do have to admit one bias – I’ve always loved Bob Dylan.