Fans of Heaven Hill’s discontinued 6 year old, namesake bottled in bond bourbon have something to cheer about now: a more recent 7-year old bottled-in-bond is here – in select markets. There is a caveat though – the previous 6 year old priced under $20, while the newer one is closer to $40.

For the unfamiliar, bottled in bond is a unique, and fairly stringent facet of American whiskey producing. The Bottled-in-Bond Act of 1897 was introduced set a precedent for quality, and authenticity, as well as a tax incentive to encourage production. Heaven Hill first released its bottled-in-bond bourbon in 1939, quickly gathering acclaim in its home state of Kentucky.

Heaven Hill has a large footprint in the industry, producing the popular Elijah Craig bourbon, and more recently has acquired Black Velvet, a popular Canadian whisky. Being that bottled-in-bond was part of one of its founding brands however, it is an ingrained consideration in their bourbon portfolio. Many bottled-in-bond labels have been acquired over the years, resulting in Heaven Hill producing was it said to be the most of these kind of whiskeys of any distillery today.

The Heaven Hill 7-Year-Old Bottled-in-Bond Kentucky Straight Bourbon Whiskey is made from the distillery’s traditional bourbon mash bill, mingled in small batches, and bottled at 100 proof. 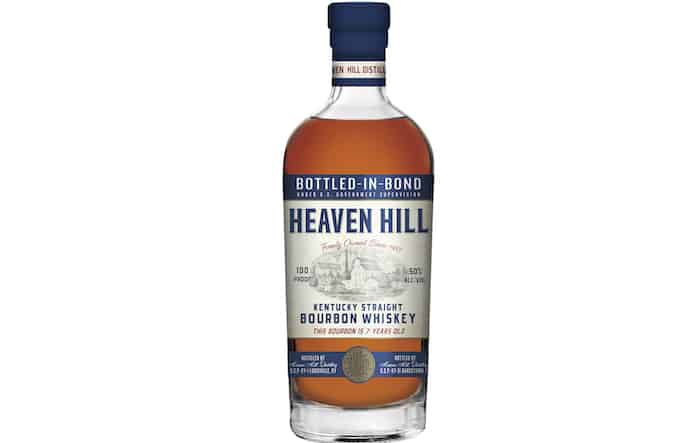 Nose: Caramel up front. A few swirls brings out earthy and nutty notes.

I admire the nod to tradition here. Bottled-in-bond might seem a bit dated and archaic, but it’s honest and transparent, and I respect that; especially in an industry trending towards flashy non-age statement releases. A nice sipper or mixer, albeit a little heavy on the nutty notes which might be polarizing. I enjoyed this, but I don’t know if a year of extra aging warrants a $20-25 price bump.