Editor’s Note: This whiskey was provided to us as a review sample by Golden Moon Distillery. This in no way, per our editorial policies, influenced the final outcome of this review.

The saloon doors swing open, as the grizzled cowboy strides up to the bar. The cowboy leans on the bar, his six-shooter visible in the holster on his hip, looks at the bartender, and gruffly says “whiskey.” The bartender pulls a bottle from under the bar, and pours some out into a dusty glass, setting the bottle on the bar next to the glass, as the cowboy downs the first round.

If any bourbon whiskey is going to invoke images and thoughts of the ‘Wild West,’ Golden Moon’s Gun Fighter American Bourbon would do it. In March of last year, Golden Moon was awarded the American Distilling Institute’s Distillery of the year award. Founded by Stephen Gould and Karen Knight in 2008 in Golden, Colorado, Gould seems to have a passion for the history and historical processes of distilling.

With an extensive research library with hundreds of rare books on distillation, products, and processes, the majority consists of books from the 1700s to the early 1900s, with a few newer references, as well as a few dating back as far as the 1500s! Not only is Stephen Gould interested in the history and historical processes, but the distillery uses antique stills, dating back to the early to mid 1900s.

Gun Fighter American Bourbon is first aged for 6 months in American Oak barrels, before finishing in used French port barrels. This bourbon is bottled at 100 proof, and at an affordable price. Unfortunately, there is not much information on the mash bill for this particular spirit. 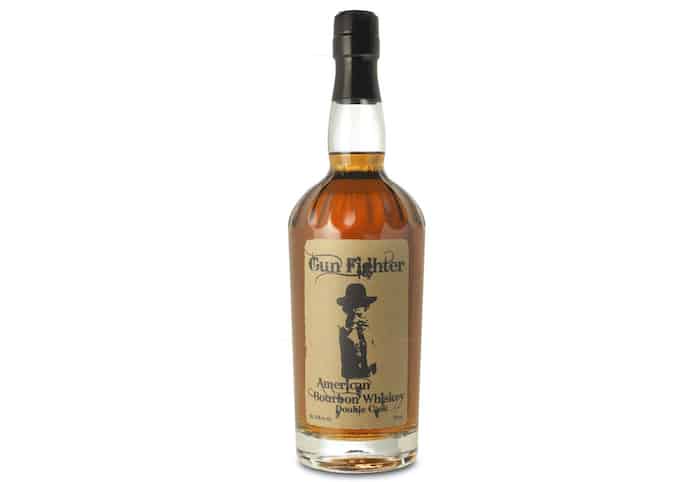 Vital Stats: This spirit is bottled at 100 proof (50% ABV), aged for at least 6 months in American Oak barrels, and finished in French Port barrels. Affordable priced at around $45 a bottle.

Appearance: This bourbon whiskey has a very nice caramel color, with a hint of redness to it.

Nose: There is definitely a hint of the port from the French Port Barrel finish, with some light floral scents.

Palate: There is definitely a very strong spice flavor to the spirit.

As I mentioned with the name and label harkening back to the “Old West,” I fully stand by that with the flavor as well. Whether it is the use of historic practices, or use of antique stills, I can’t say. But there is a definite ‘bite’ to Gun Fighter American Bourbon Whiskey. It’s the kind of ‘bite’ you would imagine from a bourbon you would order at a saloon in the “Old West”, one that the cowboys would likely take with them on their long journeys into the sunset.