Editor’s Note: This whiskey was provided to us as a review sample by Guidance Small Batch Whiskey. This in no way, per our editorial policies, influenced the final outcome of this review. It should also be noted that by clicking the buy link towards the bottom of this review our site receives a small referral payment which helps to support, but not influence, our editorial and other costs.

The whiskey or whisky business is steeped in stories and history. Enter Guidance Small Batch Whiskey and owner Jason Ridgel. He’s a native of the state of Alabama and has a goal. He wishes to drink only Black-owned spirits by the year 2022. He’s also an entrepreneur of many facets. He’s worked for corporate America and has since been doing his own thing.

Ridgel has dreams and is accomplishing them. After leaving the corporate world, he partnered up and was a part of a successful cleaning company and eventually sold off his share to start anew. The next step was getting certified as a massage therapist, and he flourished there as well. That’s still only part of the story. Recessions happen and one has to adapt. He connected with a local chiropractor and moved into the marketing end of their business.

In 2018, Ridgel began looking into the booze business. As the story goes, his first thought was sake, though it doesn’t tend to be as much of a daily sipper. After discussion with a friend, the notion of whiskey production comes up. Now that’s something that has more options to it. Though it’s still a challenge.

“Finding a distiller to work with was the hard part,” Ridgel said. “Everyone I came into contact with only wanted to work with people who had already established some buzz in the industry.”

When it comes to the name, Guidance itself has meaning to Ridgel and his team. It’s representative of where one has been and all of those that have helped out along the way. It’s a story of the journey and what it means to you.

“We can all make money together while creating legacies for our families. If we all come together as Black-owned spirit brands, we create buying power and ultimately take over the game. It’s not a competition. We need more of us in this space.” 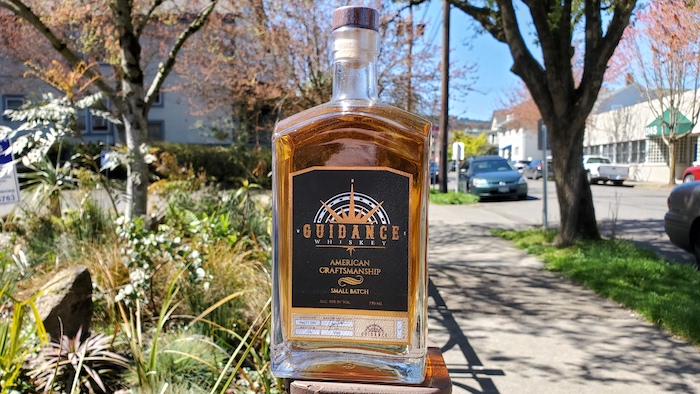 Appearance: The color for this one was somewhere between a dark yellow or pale orange. In the glass, the legs were slim and slow to appear.

Nose: At the end of the day, this was pretty mellow. A hint of heat, followed by orange zest. But there was something else going on. It took a few sniffs, but the other element was Earl Grey tea, adding some richness lingering in the background.

Palate: This was a very simple and straightforward whiskey. It was on the lighter side, with a medium finish. In regards to flavor profile, there was certainly a sweet element with notions of caramel and orange zest. In addition there were oak notes, though, as a two year, it was pretty mild.

This was a fine whiskey for mixing. However, on its own, I wanted more to happen. This is a simple sipper for a weekend afternoon. There was enough caramel and fruit to entice the palate, but not quite enough going on to justify the price point. A higher proof would accent what's already going on.

3.0
User Rating ( votes)
Sending
4
Shares
1.1k
Views
Share on FacebookShare on TwitterGet Our Newsletter
Cheers to the Dads! Personalize a bottle of his favorite whiskey to create a modern gift for the modern man. Use code: FATHERSDAY20 for $20 off your next order of $100 or more at ReserveBar