We recently reviewed the original Green Spot Pot Still Irish Whiskey, which, in its current iteration, is released after being aged in a combination of ex-bourbon and sherry barrels. The makers of Green Spot have recently introduced an experimental finishing series called ‘Wine Geese,’ in which the 7-10 year old aged whiskey is rested an additional year or more in wine barrels from wineries founded by Irish immigrants.

The Green Spot Chateau Leoville Barton was the first release back in 2015, and incorporated ex-Bordeaux barrels from the namesake winery. The most recent release, Green Spot Chateau Montelena, brings together Irish traditions from both County Cork and the Napa Valley of California.

‘Wine Geese’ refers to Irish countrymen, passionate about wine, who left their homeland in pursuit of a passion which could only be fully realized elsewhere. Jim Barrett was one, and emigrated from Waterford, Ireland to Boston in the mid-20th century. Eventually landing in the Napa valley, Barrett purchased the struggling Chateau Montelena winery in the 1970’s, and restored it to its former glory.

The inspiration behind using the Montelena Zinfandel barrels to finish the Green Spot whiskey came from the unique spicy berry notes imparted by this particular grape. Kevin O’Gorman, head distiller at Midleton (where Green Spot is made,) noted the “distinctive and refined” character that it adds to an already fruit-heavy whiskey.

The name ‘Wine Geese’ is a play on the term ‘Wild Geese,’ which referred to 16th century Irish soldiers who traveled to Continental Europe during wartime and posted up in places like France, Italy, and Austria (where, coincidentally, wine is a big thing.) It’s no surprise, then, that this similarly-named experimental series of Single Pot Still Irish Whiskies should continue to offer some interesting collaborative spirit showcasing thoughtful and unique fusions of grapes and whiskey. 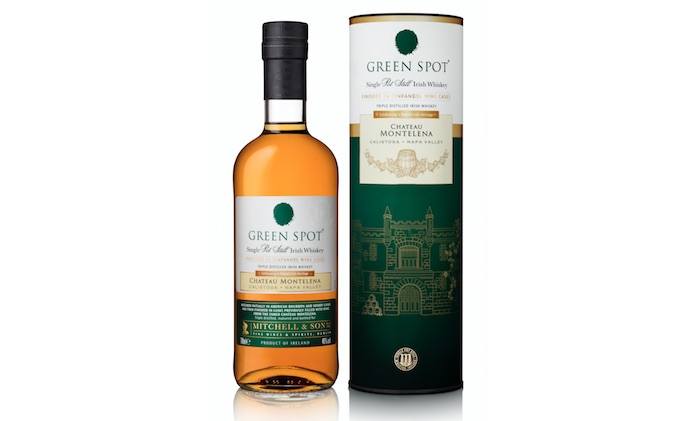 Appearance: This edition of Green Spot pours, well, peachy. It’s both slightly opaque (or shall we say fuzzy?) and contains the perfect peach-like trifecta of yellow, orange, and pink to create a dull, yet summery appearance. Legs are solid and the liquid appears free of sediment and color separation.

Nose: The initial few sniffs of this whiskey produce variations on a theme: oak. I sense everything from vanilla to butterscotch, freshly-shaved pencil to the smell of burning wood. There is a sweetness that lingers throught this oakiness, and it especially brings the more desserty elements of wood to the forefront. I can reach to find some lighter fruit elements like nectarine and banana, but I’m missing the grape, and the deeper the inhales the more a slight bit of acetone-like sharpness emerges.

Palate: First and foremost when this liquid hits the palate, its the unique mouthfeel associated with single pot still that wows. Thick and rich, luxurious and coating without being cloying or excessively sweet, the texture certainly takes top honors here. Flavorwise, there are big esters here which seem off for such a refined and extra-aged whiskey. Bananas and butterscotch smack you up front, and a light dusting of strawberry carries you through the alcohol burn. Still searching for the spiciness of Zinfandel grapes, some sunbleached grass and vanilla salt water taffy round out the finish, where these notions of grape seem best left in my imagination. They’re certainly not in the glass.

This is a pretty balanced whiskey with visual and technical flaws. Overall average, but also deserves a ding for failing to properly integrate the second use Zinfandel barrels in to the flavor profile. The slight pinkness visually sets the wine hybrid aspect up for success, but no amount of searching will find the notes that a wine aficionado would be looking for. A lover of Single Pot Still Irish Whiskeys however, will take joy in the mouthfeel and appropriate levels of sweetness.

Read More Whiskey News
Whiskey Review: Cascade Moon Edition No 1
3
User Rating 3.36 (11 votes)
Sending
52
Shares
3.9k
Views
Share on FacebookShare on TwitterGet Our Newsletter
Cheers to the Dads! Personalize a bottle of his favorite whiskey to create a modern gift for the modern man. Use code: FATHERSDAY20 for $20 off your next order of $100 or more at ReserveBar