Editor’s Note: These products were provided to us as review samples by Goose Island. This in no way, per our editorial policies, influenced the final outcome of this review.

A tenet of life on this planet is that moving sucks. Even if you believe it’s the right thing to do. It doesn’t matter if you have a lot of stuff or a little. Or whether it’s sunny or raining or snowing or hailing. Even the best laid plans will snag in the process of moving. I promise.

Much as we love bourbon in these parts, those bottles are heavy! Especially when you’re lugging boxes and boxes of them. Or they might break or spill. But Chicago-based and—as of 2011—Anheuser-Busch-owned (Goose Island Beer Co’s got just the thing: Crack open a cocktail like you would a beer. Nicely portable, which these days, I really, really appreciate.

So, I think it’s safe to say these spirited spirits are nothing new.

But neither is Goose Island. As we’ve said before, Goose Island Beer Co’s brewers have been experimenting and blending with bourbon barrels for the better part of 30 years. The evidence? Their bourbon-barreled stouts, which are annual releases. Their craft cocktails use MGP-sourced three-year-old bourbon, and they explain why on their website: The TL, DR version is that younger whiskey doesn’t develop the “complex tasting notes of oak, vanilla and caramel that you can only get from aging in a barrel.”

But some may be impatient.

Late last fall, Goose Island released three craft cocktails: the Old Fashioned Highball, the Whiskey Sour, and the Blackberry Smash. Here are there vital stats: Each is 9 percent alcohol by volume and will be $15.99 per 4-pack of 12 oz. cans. At time of release they were only available in the Chicago are, but may roll out in a wider area this year. Each uses three-year-old whiskey sourced from MGP. The cocktails can be imbibed straight from the can or over ice. For tasting purposes, I tasted each in a glass, un-iced, at room temperature in a cold-ish room. 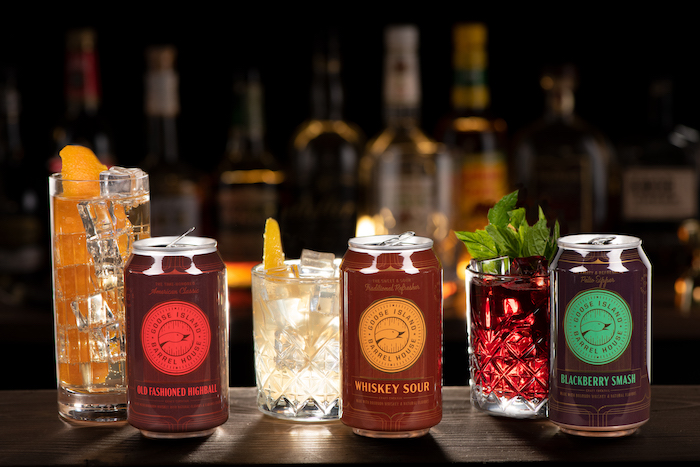 Appearance: I don’t know what color I would expect, exactly, from a canned cocktail, actually, but this is somewhat pale, like the color of ginger ale, or light and non-cloudy apple juice.

Nose: The nose is really lovely! It’s a welcoming cherry, and a kickass orange. It tastes like how a good and proper Old Fashioned should smell. It smells like a candle I’d like to burn.

Palate: I don’t really like this. It tastes like a very watered-down cocktail. It tastes you’re on a bad date and shaking the ice in your glass while you desperately await a refill. Also, there is an acrid note on the finish. It smells so good and tastes so disappointing! I am sad. I expected more. Boyfriend sauntered into the kitchen to see what was up and had a sip. Said: “A soda that has been around too long.”

Appearance: A little cloudy, I bet it’s from the citrus. It’s the color of the lemon juice that comes from the plastic lemon. Then again, I would hope this was cloudy though and not clear because sour mix is…cloudy and not clear. Right?

Nose: A muddied citrus. Kind of stale, like stale lemon, like lemons after a while in a drink that’s gone flat but still has lemon in it. Very lemony. The bourbon smell comes through, too. I hate to say this before I have even had a sip but this smells like…how I imagined a canned cocktail to taste. Tinny.

Palate: Color me surprised! I actually do not hate this, though it certainly does not have the complexity of a Real Drink. The smell put me off more than I expected (or maybe exactly as much as I expected). But it’s pretty refreshing, actually. I tasted this on a cold and gloomy day, but I could see reaching for one of these from an ice-stuffed cooler on someone’s patio come August. Boyfriend: “Tastes like you made a drink and let it sit on the coffee table for three days and decided to drink it.” (He has done this.)

Appearance: A very pretty color. And a precise one—it is, exactly, the color of smashed blackberries. Like the color of a juicy, jammy Zinfandel during a vineyard visit.

Nose: It smells, so much, like the açai flavor of Emergen-C. Kind of sweet, a little fake. But it’s also also juicy on the nose as well as the eyes. And it smells a little like they blended ripe-to-bursting cherries in it. I hope this does not taste like cough syrup.

Palate: This is not as sick sweet as I had feared. It’s the best balanced of the bunch! The whiskey and the berry offset each other very well. I think this would be a solid summer choice over ice. And in fact, I’m surprised they rolled this out last fall, because this shouts summer to me. There’s a slight finish of art gallery wine but it’s not a huge problem, I happen to like art gallery wine. It tastes a little like getting to the bottom of a Manhattan where some Amarena cherry juice has settled. Boyfriend: “Cherry coke.”

Final Thoughts: I feel like these need to be really cold on a hot day for them to be truly refreshing. But if you like whiskey, don’t care about cocktail complexity, and you like to travel light, these may be your thing.