Editor’s Note: This whiskey was provided to us as a review sample by Golden Moon. This in no way, per our editorial policies, influenced the final outcome of this review. It should also be noted that by clicking the buy link towards the bottom of this review our site receives a small referral payment which helps to support, but not influence, our editorial and other costs.

Single malt whisky is most readily associated with the grand tradition of Scotland distilling. The hours of focused care in process matched with the moist environment have established the Scottish distillers with a legendary status for excellence. American distillers have pulled from these traditions and practices for generations to develop distinctly American spirits with their own flavor profiles. Once in a while you stumble across an American distiller that thumbs their nose at the idea that a single malt whisky can only come from Scotland and we end up with a pleasantly drinkable whiskey like Principium from the Golden Moon distillery.

Tucked away in the foothills of Colorado lies a quaint town most known for being the home of Coors brewing plant. This picturesque backdrop is a fitting place for distilling with access to local farms, clean water and drive to create and recreate fresh takes on liquors that can fill the empty space in a bored palate.

Golden Moon Distillery was founded by Stephen Gould and Karen Knight with a purpose of distilling and bringing back to life herbaceous liquors that had gone extinct over the past 100 plus years and to put a fresh spin on other creations such as their whiskeys. The distillery has become a stomping ground for those that want to indulge in cocktails and drinks that have gone, particularly when engaging with the facility’s Speakeasy and online tutorials on cocktails.

There are other American distillers like Clear Creek Distilling that are producing Scottish style whiskeys, and with Principium pulling in some serious clout with gold medals at the World Spirits Competition, many are now taking note of this small town distillery with their old world sensibilities. For this particular whiskey, it uses 100% malted barley sourced from local farms as well as neighboring states’ farms. It is aged in American oak and bottled at 92 proof. 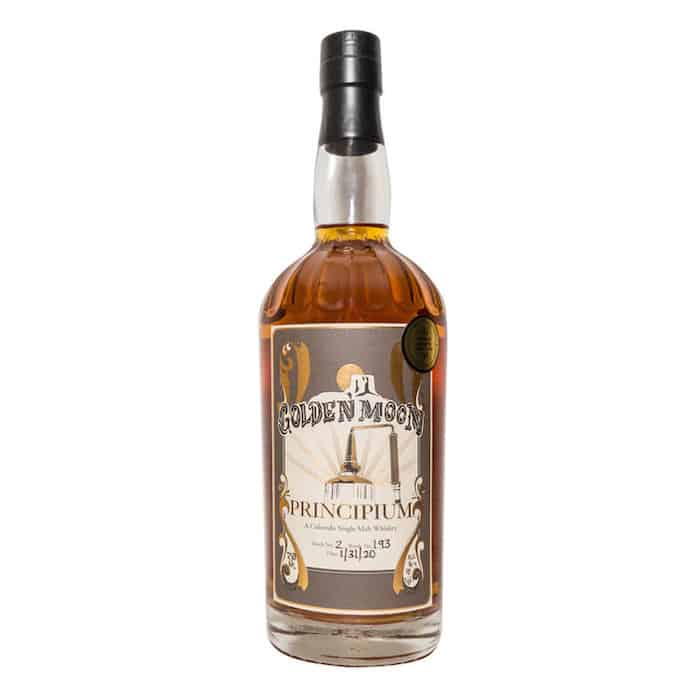 Vital Stats: Golden Moon Distillery uses 100% malted barley sourced from local farms as well as neighboring states’ farms. It is aged in American oak and bottled at 92 proof. Its amber shade is inviting, and the gold leaf laced label is eye catching, if not a little hard to read.

Nose: Upon my first sniff I was hit with a strong oaken and a sweet scent of banana bread and apple juice. There was also a hint of clove to round out the baking spice notes.

Palate: There is a mature mouth feel with a buttery texture. The heat is present from the first sip and a bit of cinnamon candy teases the taste buds. I was expecting a bit more of a molasses flavor from the sweet character but was reminded more of maple syrup as I sipped further. The heat was a little more forward than I generally prefer but it was not cloying, and neither was the sweeter flavors. The oak notes were in the background no matter what tastes came forward, giving it an almost leathery character.

I found this to be a well-balanced whiskey with a nice amount of character to keep you engaged through a full dram. Although it was not my first choice in flavor profiles, I did find this a solid entry into the American Single Malt Whiskey forefront with much to be proud of.