Back in 2016, I reviewed a whisky called Gold Bar Whiskey, a new introduction packaged in a truly remarkable bottle shaped like a gigantic gold bar.

At the time, I thought it was pretty silly. It looked like something a James Bond villain might drink, and because the bottle was shaped like a trapezoid, it couldn’t stand up on its own. Instead, it came with a chintzy plastic stand that held the bottle upright. I wondered, given the relatively light and forgettable whiskey inside, was the $40-$50 price tag worth it for little more than some unforgettable packaging?

Several weeks after writing that review, I got a valuable lesson in exactly why somebody would want a whiskey in a bottle straight out of Fort Knox.

After writing my review, I took the remainder of the bottle to a friend’s backyard bash, where it was an absolute showstopper. Instead of languishing on the bar like just another bottle of $10 malbec, it was immediately and enthusiastically seized by every attendee, who took turns Instagramming each other cradling, admiring, and pouring the bottle of Gold Bar Whiskey into their glasses (or, in the case of one rompered Millennial, directly into her mouth).

Throughout the evening, a glint of gold would catch my eye and I’d see yet another gaggle of partygoers clustered around the fire or sprawled out on a picnic blanket, both settings where it doesn’t matter if the whiskey stands up, savoring the glowing presence of Gold Bar Whiskey in the fading summer light. Touché, Gold Bar Bottle Company.

So here’s the real story with Gold Bar Whiskey: If you want to be the MVP of your next neighborhood party, bring a bottle. Gold Bar Whiskey is a totally perfect party whiskey. Gold Bar Bottle Company has reformulated the whiskey, too, finishing it in wine casks to give it a little more color and complexity. The spirit’s accessible and easy drinking, but really, the story here is about the bottle—which, after a design revision, now thankfully stands up all on its own. 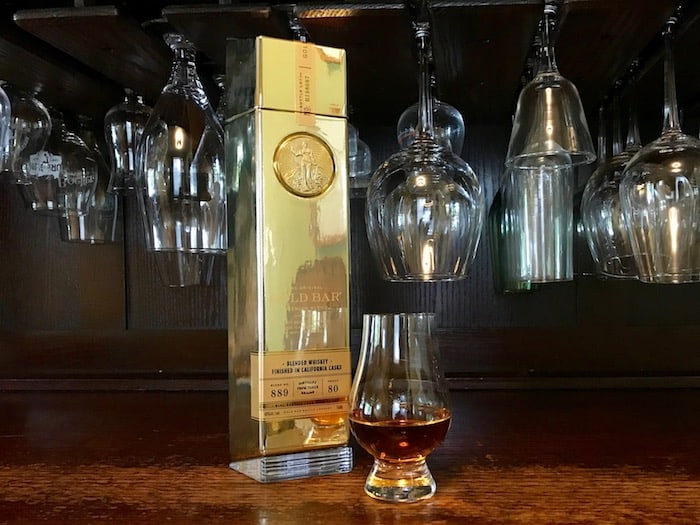 Appearance: The whiskey is dark apricot. It’s packaged in a custom bottle shaped like a gold bar, adorned with a solid brass custom coin designed by artist Steven Noble. The brand says the bottle and coin are intended to be a symbol of good luck and prosperity.

Nose: I notice intense floral notes, with roses and potpourri along with cherries, plums, and citrus candy. There’s also maple syrup, caramel, and lots of vanilla as well as a toasty, corn cake aroma complete with sweet butter.

Palate: As the nose suggests, there’s plenty of sweetness here. It’s a very fruity palate, with lots of red fruit, citrus, and even a little banana. The oaks comes through primarily as a heavy note of caramel, with just a touch of clove and a hint of astringency in the finish. The mouth feel is silky and soft.

This version is definitely better and more interesting than the previous batches, yet unabashedly easygoing. It reminds me a bit of Crown Royal. I’d pass on this as a contemplative sipper, but for a party bottle, it’s an easy win.