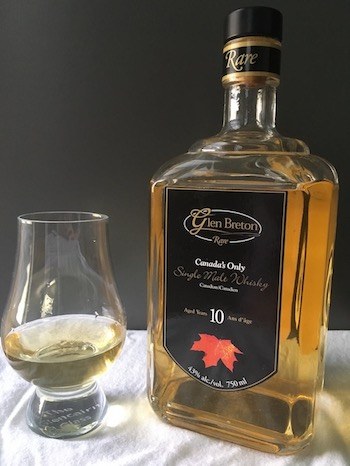 If you pick a bottle of Glenora Distillery whisky and you’re surprised to see its claim to being “North America’s only single malt whisky distillery,” try typing “Cape Breton” into an online image search.

Upon doing that you’ll find images of dramatic highlands, steep cliffs and rocky, windswept coasts that look like they’d fit into the Scottish Highlands, prompting many Scottish immigrants to North America to settle here in the 1800s for the “beauty that resembled the Highlands and Islands of Scotland,” according to Glenora’s website.

If you need more proof of Scottish influence, consider that the distillery is situated along the “Ceilidh Trail” (also known as Route 19) in Inverness County in the province of Nova Scotia (New Scotland), and gets its water for distilling from MacLellan’s Brook.

First built in 1990, the distillery bottled Glen Breton Rare for the first time in 2000 and, despite its Scottish roots, had to fight a nine-year legal battle with the Scotch Whisky Association over its use of “Glen.”

Gelnora finally won that contest in 2009, and memorialized their legal victory with “Battle of the Glen” 15-year-old. As exciting as that one sounds, I’ll be reviewing Glenora’s “signature single malt product,” Glen Breton Rare 10-year, though we previously reviewed the 14-year-old.

The bottle says little about the production of this whisky, but the website indicates that it was aged in American oak barrels in the distillery’s apple orchard.

Vital stats: Aged ten years in American Oak barrels and bottled at 43 percent alcohol by volume. Sold in a 750-milliliter bottle, but prices seem vary widely amongst online retailers from about $43 to about $70.

Appearance: Lighter than the average whiskey, like a bright or illuminated amber.

Nose: Woody and smoky at first sniff with a heaviness to it, a bit like opening an old wooden cigar box after a few years. That turns to a sweeter, more tropical scent with orange, sandalwood, honey, and nutmeg with a touch of salt and smoke. Over time, it takes on more and honey and grows into a more lemony scent.

Palate: The 10-year-old has a heavy, earthy, and sweet vanilla flavor when it makes first contact with the tongue. That takes on a woody and smoky flavor like in the nose reminiscent of a gentle tobacco, but this time with a more distinctly oak flavor. From there, it takes on spicier notes of allspice and touch of earthy cocoa that gradually grows in intensity as its sits in your mouth. On swallowing, a spicy notes pushes through like a wave from the back of the mouth along the roof to the front, hitting the corners of the mouth and making me pucker a bit.

I initially thought Glen Breton Rare 10-year was a little bland, but a few extra sips proved me wrong – to a point. It’s still not especially complex or flavorful, and the flavors that do come out can across as a little musty at times, but it grew on me after a while. A solid showing for what is boasted as North America’s first single malt, but don’t give up your regular scotch just yet.