While demand for craft spirits is still on the rise virtually everywhere in the United States, the number of craft distilleries in Montana – where a population of barely 1 million people is spread across nearly 150,000 square miles of rugged mountains and sprawling prairie – is more then one might expect. It shouldn’t be so surprising, though, as the state is home to some of the country’s best preserved wonders that draw about 12 million visitors per year to the state, according to The Billings Gazette, particularly the mountainous western half.

With that stream of tourists, a collection of craft distilleries has grown up over the last decade in the area between Kalispell and Glacier National Park, including Glacier Distilling Company.

Glacier Distilling Company began as a campfire-side debate near the secluded North Fork of Glacier National Park, where a group friends reportedly argued about how they would procure whiskey in the event of “Armageddon, according a guest post from the company on our site.

After concluding that they would have to make whiskey themselves, founder Nicholas Lee decided not to wait for the end times and had established the company just a couple years later in 2011.

Lee reportedly chose to establish operations in the tiny unincorporated community of Coram – which had a population of just 539 in the 2010 U.S. Census – where he “found an old barn with a good well on a glacial aquifer with pure, cold water, and started distilling.”

In addition to a wide variety of other spirits, Glacier Distilling Company makes five different whiskeys, including Bad Rock Rye, a bottle of which we review here. The distillery provides very few details about this straight rye named after nearby Bad Rock Canyon, but the bottle I sampled was aged for 20 months and bottled at 56% ABV. 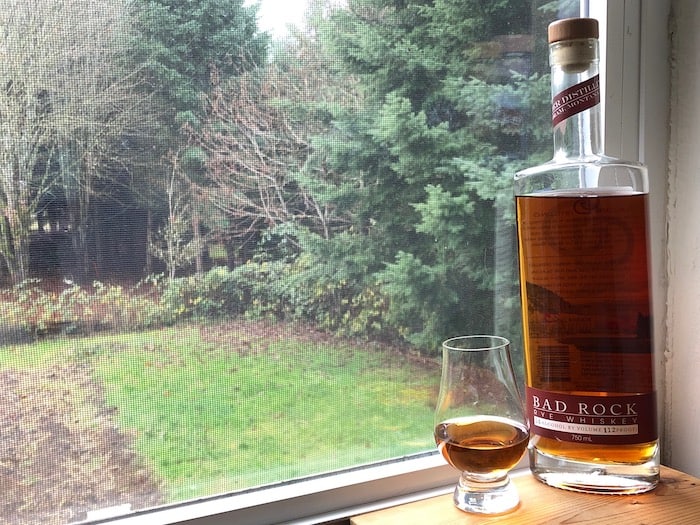 Vital stats: Bad Rock is a straight rye aged for three years according to Glacier Distilling Company’s website, but my bottle had a 20-months stamp on it. The whiskey is bottled at 56% ABV. The Montana Department of Revenue priced a 750mL bottle at about $48 in December. At this point, Bad Rock Rye is only available at a couple dozen stores across Montana and one store in Jackson, Wyoming.

Appearance: Bad Rock Rye comes in a tall, narrow, minimalist bottle that’s generally free of adornment save for the scenic landscape on the label that’s difficult to see through a full bottle. Normally, a slim bottle might make a whiskey appear lighter, but not in this case. Bad Rock has a deep rusty, coppery red hue in the bottle that’s darker than average, and pouring it into a glass only slightly brightens it.

Nose: Initially, Bad Rock Rye wafts into the nose with the scent of a rich, decadently sweet caramel with a touch of roasted pecans and tart crust. After a moment, the whiskey develops into a smokier bouquet. With an oaky rye serving as the smoky undercurrent, smells of ginger and clove become the most prominent flavors while light notes of apple soften the edges of the spices.

Palate: Entry onto the palate again brings a sweet taste of caramel – though not as intensely sweet as with the nose – with a fruity, slightly tart character of red apples in the background. As the whiskey sits, the apple flavor briefly becomes the dominant flavor before it gives way to clove and pepper that continue to build to a moderate tingle on the tongue, curbed a bit by a molasses base underneath them.

Swallowing sends a wave of spices across the tongue – potent in terms of flavor but light in terms of burn to the mouth. However, those spices stick around over a generally sweet undercurrent, with flares that are more intense and frequent than usual as the flavor gradually tapers off.

Bad Rock Rye is certainly an easy drinker and one that I would be happy to have in a post-apocalyptic hell scape. While it lacked the subtlety that I normally like in a whiskey, the spicy and sweet attributes complemented each other well with nice give-and-take between them. Although Bad Rock is on the sweeter side of rye, it still has interesting transitions and worth sampling if you find yourself in Montana.