Americans’ love of hot sauce, and specifically the tabasco pepper, can actually be traced all the way back to Louisiana during the 1700s. The marrying of French, African, Native American and Spanish cultures led to unique food, all characterized by a bit of heat. Thanks to the state’s warm climate, any poor person could easily grow hot peppers on their land. Thus enters in 1868 Edmund McIlhenney, the inventor of Tabasco Sauce, the same sauce we see on grocery store shelves today, still using the same pepper to vinegar ratio they’ve been using since day one. This year, the company celebrates their 150th anniversary.

Interestingly, Tabasco is made in a somewhat similar way to whiskey or wine. A pepper mash, vinegar and spices all age slowly in bourbon barrels for three years before being bottled. George Dickel Tabasco Barrel Finish from newly renamed Cascade Hollow Distillery pays homage to America’s most famous hot sauce in their latest release.

The Tabasco Barrel Finish takes non-age statement Dickel Tennessee whiskey and lets it rest for upwards of a month in barrels that had previously held tabasco peppers for three years. During this 30 days of further aging the whiskey is said to pick up hints of the spice and flavor imparted into the barrel wood from the peppers. From here Tabasco Brand Pepper Sauce is distilled into an essence, and then blended together with the whiskey to create the final 70 proof bottling. The final result leaves me with mixed feelings. 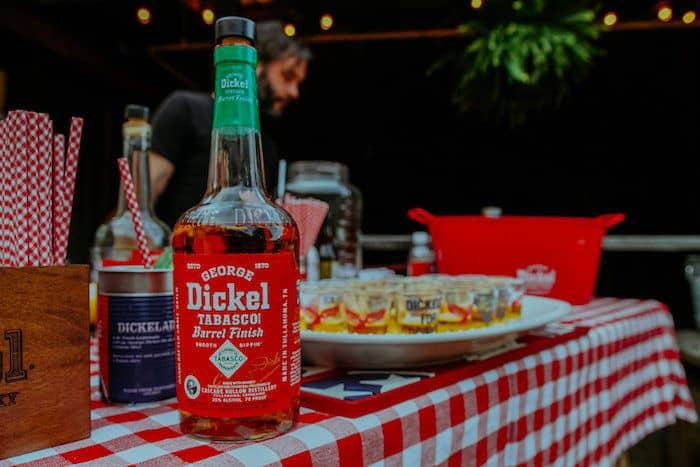 Vital Stats: The label reads that it is “made with whisky distilled and charcoal mellowed at Cascade Hollow Distillery.”  It’s 35% abv and 70 proof, and costs $17 per 750ml bottle. The mash bill is the same as their regular Tennessee whisky: 84% corn, 8% rye, 8% malted barley.

Appearance: The whisky is dark, golden amber in color with thin, glass-like legs. In the bottle it’s got a reddish tint, but I think that’s just a reflection from the red label. The branding is perfect: a red label, white letters, complete with a green cap make the whiskey look just like any bottle of Tabasco you’d find in your fridge.

Nose: There’s a heavy dose of maple syrup, charcoal, with notes of vinegar and a smoky peppery finish. Even when you play up the dichotomy of sweet and spicy smells, the whole thing still seems a bit underwhelming.

Palate: I expected it to be more of an in-your-face tabasco flavor, but I’m pretty happy it’s much more subtle than that. It’s not inherently spicy, just some hot pepper and vinegar notes that linger on the finish. Maple syrup and vanilla kick things off, along with a smooth, oaky body rounding out into a spicy, tabasco pepper finish. It’s a pretty classic sweet and spicy combo. I like that it’s just a bit oily on the palate, and even though it’s sweet, there’s no syrupy texture. It definitely leaves something to be desired, but it wasn’t as weird as I thought it was going to taste.

It’s not bad, albeit a bit confusing on the palate. I liked it best as as the distillers recommend, as a simple cocktail with celery salt on the rim and a pickle back. The celery salt offset the saccharine notes of the body and complemented the hot finish. It’s also great in a Bloody Mary, with celery sticks, pickles and whatever else you like to throw in.