Even though it happens every year, I am always surprised at how strange it seems at this time of year. I am sitting down to get to know my latest whiskey at about 4:45 in the afternoon on the eve of “falling back” to standard time in the U.S. and it is almost dark outside. I know that we are at the mercy of our planet’s orbit for the seasons and the amount of daylight that we are given, but it almost always feels like part of your day was taken away from you without your permission. Even though I may think it’s appropriate at any temperature, they do call this “whiskey weather” for a reason, and for that, I am grateful.

If you were to notice The Garrison Brothers Distillery on a map of Texas, you would see that the small hill country town of Hye forms a triangle with Austin to the east, and San Antonio to the South. I have seen many videos of the lines of cars of bourbon fans lining up at very early hours of the morning, many driving in from the aforementioned metropolises for a chance to purchase special release bottles, many only available at the distillery. Bisecting that triangle on the map is Texas’ Guadalupe River. This is a very well known summer recreation area, with thousands of inner tubes floating, and many a fishing line cast at any given time. Guadalupe is also what Garrison Brothers has named their latest expression to be added to their portfolio.

Back in 2015, Garrison Brothers embarked on a collaborative project with a Texas winery by trading 20 of their wet bourbon barrels for 20 of the winery’s decade-old port casks. The result was the 2019 limited release Estacado, named for Llano Estacado the source of the port casks. Realizing that he may be on to something, Master Distiller Donnis Todd realized he may need to find more casks if he wants to make this a permanent expression, so he looked to the birthplace of Port wine, Portugal.

Todd selected 90 thirty-gallon bourbon barrels that had been originally filled in 2015. The angel’s share losses were about 13 gallons per barrel, meaning there were just 1,530 gallons of bourbon to be used. This liquid was entered into twenty-six 59-gallon port casks in 2019, and then bottled and released in 2021. And in true Garrison Brothers fashion, the distillery hosted a drive-thru release event at the end of July, giving enthusiasts the opportunity to get their hands on the first bottles of Guadalupe. Fortunately, there appears to be enough to share nationwide, so let us get to tasting. 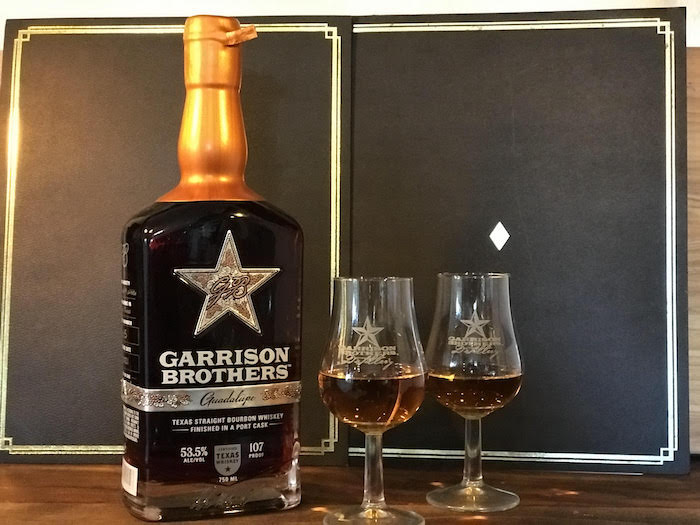 Appearance: Clear, with an ochre to red tint on the top, blending into an orange and brown hue. If this were to be handed to me in a copita, I might mistake it for an Oloroso sherry.

Nose: Must on the first approach. Molasses and brown sugar present on a second inspection, with worn leather and pipe tobacco lingering on the aroma.

Palate: The lingering must and leather on the nose are mingled with some spice on the first sip. Stewed fruit and astringency linger before giving way to a black berry cobbler finish.  Reminiscent of Granddad’s leather jacket that he smoked a pipe in.

As you would expect, the Port characteristics have had a huge influence on this spirit, almost taking it beyond bourbon. Garrison Brothers has described this “your dessert bourbon” and I could definitely see it serving as such paired with the last course of your meal. This would also feel at home while enjoying cigars with a friend on a chilly evening. It may not take me to floating a river on a long, endless summer day, but this will keep me warm until the next opportunity.