Editor’s Note: This whiskey was provided to us as a review sample by Frey Ranch Distillery. This in no way, per our editorial policies, influenced the final outcome of this review. It should also be noted that by clicking the buy link towards the bottom of this review our site receives a small referral payment which helps to support, but not influence, our editorial and other costs.

Nestled in the heart of the Lake Tahoe Watershed just outside of Fallon, Nevada since 1854 is Frey Ranch. There are less than 3,000 farms in the Silver State as water rights make agriculture a less lucrative business. Farming coincides with whiskey, and just as there is an art to distilling there is an art to farming. Fifth-generation farmer and CEO Colby Frey saw an opportunity to expand his farming expertise into distillation and considers himself a “whiskey farmer.”

While wine production began in 2001, distilling hard spirits began in 2006. Up until 2010 Nevada hadn’t fully enacted laws regulating small distilleries, so that gave Frey plenty of time to master his whiskey recipe. Every part of the whiskey making process is done on the 2500 acre ranch; the crops are sustainably grown, malted, distilled, aged, and bottled. Frey Ranch Estate Distillery officially opened in 2014.

Previously making vodka, gin, and absinthe, Frey Ranch Estate Distillery has launched their straight bourbon whiskey. Made with only 10 percent of their crops, the rest of their crops mostly go to the dairy next door to feed the cows. The whiskey is distilled in a custom Vendome still before it is matured for four years. Four fermenters, a beer well, and a mash cooker that can hold up to 5000 gallons each also sit in the distillery.

For now, Frey Ranch Straight Bourbon Whiskey is only available in Nevada. In spring 2020, the distillery plans to release the product into the Northern California market. 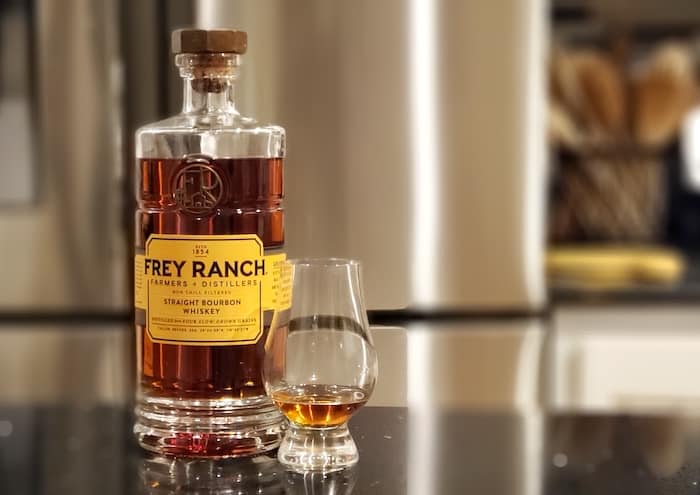 Nose: Ripe with a mixture of summer black and Rainier cherries. It comes off a bit like nail polish, but not overwhelmingly so. There is a sour tang to it reminiscent of sourdough bread rather than citrus. If I were to nose this blind with Tennessee whiskey, I don’t think I’d be able to tell the difference until I sipped it. In the background is the sweet scent of sugar cane.

Palate: The first thing you notice about the whiskey is the velvety and soft mouthfeel. It has a quick astringent nature, but otherwise it does not drink like a 90 proof whiskey. It’s interesting, but in a good way. It takes quite a while to decipher this bourbon.

The spice of the rye packs a greater punch than typical rye, but that is because of the way Frey Ranch grows their grain. Banana chips and dried cranberry mingle with grain like gorp.  Opened up with water you get a acetone quality, but you can pick up on more fruit.

Frey Ranch Straight Bourbon Whiskey is truly a marvel whiskey. I found myself a little too perplexed by what I was tasting because it complex. I think it is best enjoyed neat, but it would be great to cocktail with. The mouthfeel is the highlight of this whiskey. If you have the patience to let it sit and breathe for about 10 to 15 minutes, all the flavors shine.

Frey Ranch Estate Distillery's motto, "Be good to the land and the land will be good to you," is engraved on every bottle. The care with which the land is harvested is felt in every drop you drink. I say buy it, you'll be surprised by this gem and Nevada's only grain-to-glass bourbon.

4
User Rating 3.06 (78 votes)
Sending
246
Shares
5.9k
Views
Share on FacebookShare on TwitterGet Our Newsletter
Cheers to the Dads! Personalize a bottle of his favorite whiskey to create a modern gift for the modern man. Use code: FATHERSDAY20 for $20 off your next order of $100 or more at ReserveBar